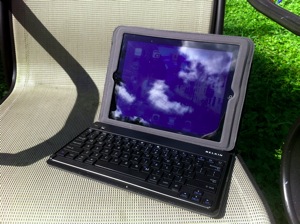 is a useful addition to my repertoire of iPad accessories. If you have the need to type more than a handful of words on occasion, then a Bluetooth keyboard should be something you either have or are considering. But do you really want to lug along another item with your iPad. This case makes it easier.

I used to carry my Apple Bluetooth keyboard in a special case of its own, but it was bullky and I had to remember to turn off Bluetooth on my iPad or the jostling of the keyboard in my bag would turn the iPad on and kill the battery.

As for the Belkin case, on the plus side, the keyboard has an on/off switch to save its battery when you’re not using it and to prevent the problem I mention above. It also comes with a standard USB mini port and cable for recharging, which is better than having to fiddle with AA batteries.  The case also allows the positioning of the iPad at several angles, although not at the extreme angles you see in other cases/stands. I’ve used the keyboard case for about a month now now and it’s worked well and is comfortable. Battery life has been very good as well. I just now had to plug it in for a recharge for the first time. Also the way the keyboard folds up out of the way when not in use is convenient.

On the other hand, the keyboard is a bit cramped. The keys are a bit smaller and closer together than a full-size keyboard so my typo rate is higher. The case is limited to displaying the iPad in landscape mode, unlike the Targus Versavu Keyboard and Case for iPad 2

which allows rotation of the iPad to portrait mode. I’d use that sometimes if I could. As you’d expect the case adds a lot of bulk to the sleek, svelte iPad, but I’m not sure that’s unavoidable with an integrated keyboard. With a separate keyboard, I was at least able to leave it behind when I wasn’t using it.

Unfortunately, the Belkin case’s cover doesn’t incorporate Apple’s Smart Cover magnets so it doesn’t turn the iPad on or off as you open or close it. That wouldn’t be so bad, but I find the ports and buttons sometimes difficult to access. Plugging in the dock connector cable requires a very deliberate effort, for example. I’m not sure why all the extra fabric hanging out around the edges is necessary except perhaps for ease of manufacture. I find it annoying. Also, unlike the Smart Cover, the Belkin’s cover doesn’t do anything for wiping skins oils or fingerprints off the screen. I never realized how much the Smart Cover does clean until I what happens when it isn’t there.

The bottom line: The Belkin iPad 2 keyboard case is a decent product, but given it’s $100 price and the fact that the Targus Versavu keyboard case is less expensive, yet has fewer of the Belkin’s limitations in a better-looking package, I’d spend my money on the Targus. But since I have the Belkin now, I’m going to keep using it and it will serve me just fine.

Disclosure: I received the Belkin iPad 2 case as part of Amazon.com’s Vine program, in which certain customers receive free products in exchange for reviews posted on the site. While I get to keep the products I review, there is no expectation or pressure given to make a positive review of any product. All opinions are my own and completely unbiased by external factors. Links in this post are Amazon affiliate links. I will receive a small percentage of purchases made as a result of clicking on one of them.