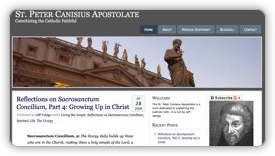 A new blog from Jeff Vehige called St. Peter Canisius Apostolate, with the stated goal of catechizing the Catholic faithful. Current posts include a series of reflections on the Vatican II document on the liturgy called Sacrosanctum Concilium, a list of “five books every Catholic should read”; a series called “Fridays with the Fathers,” as in the early Church fathers; and “Tuesdays with”, not Morrie, but “St. Thomas”. Looks like good meaty intellectual stuff.