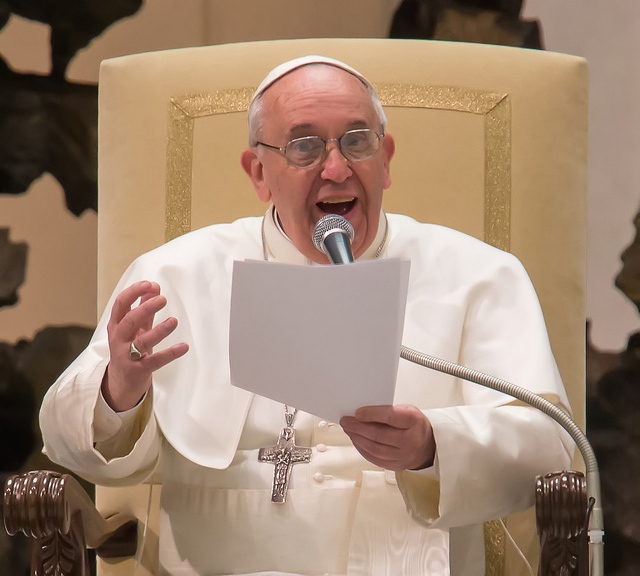 There’s been a lot of angst and blather over a relatively minor portion of Pope Francis’ apostolic exhortation Evangelii Gaudium, a few thousand words out of 55,000 on matters of economics. Political conservatives like Rush Limbaugh and Judge Andrew Napolitano have excoriated the Pope for his “Marxist” views and many Catholics have dismissed the Holy Father’s comments as just matters of prudential judgment that may be dismissed. On the other side, plenty of liberals, including President Obama, are jubilant over what they see as the Holy Father providing support for their Big Government, Nanny State economic policies.

But what if they’re all wrong?

For one thing, none of them seem to be reading the same document I am. Consider the paragraph garnering the most attention, #54:

In this context, some people continue to defend trickle-down theories which assume that economic growth, encouraged by a free market, will inevitably succeed in bringing about greater justice and inclusiveness in the world. This opinion, which has never been confirmed by the facts, expresses a crude and naïve trust in the goodness of those wielding economic power and in the sacralized workings of the prevailing economic system. Meanwhile, the excluded are still waiting. To sustain a lifestyle which excludes others, or to sustain enthusiasm for that selfish ideal, a globalization of indifference has developed. Almost without being aware of it, we end up being incapable of feeling compassion at the outcry of the poor, weeping for other people’s pain, and feeling a need to help them, as though all this were someone else’s responsibility and not our own. The culture of prosperity deadens us; we are thrilled if the market offers us something new to purchase. In the meantime all those lives stunted for lack of opportunity seem a mere spectacle; they fail to move us.

Some read this as a rejection of capitalism and yet nowhere does the Holy Father use the word. So they latch onto his references to “trickle-down” theories and free markets. Yet, there is more to this story. At the beginning of the paragraph, he refers to “the context”. What context?

In the previous paragraph he refers to a economy of exclusion and inequality, one which lacks the capacity to rouse compassion at the death of the unfortunate.

Human beings are themselves considered consumer goods to be used and then discarded. We have created a “throw away” culture which is now spreading. It is no longer simply about exploitation and oppression, but something new. Exclusion ultimately has to do with what it means to be a part of the society in which we live; those excluded are no longer society’s underside or its fringes or its disenfranchised – they are no longer even a part of it. The excluded are not the “exploited” but the outcast, the “leftovers”.

Only by referring to this context can we understand what the Holy Father means in the next paragraph. And then we must see very important words being used (my emphasis added):

In this context, some people continue to defend trickle-down theories which assume that economic growth, encouraged by a free market, will inevitably succeed in bringing about greater justice and inclusiveness in the world. This opinion, which has never been confirmed by the facts, expresses a crude and naïve trust in the goodness of those wielding economic power and in the sacralized workings of the prevailing economic system. Meanwhile, the excluded are still waiting.

I don’t see a critique of the free market in itself here, but an acknowledgement that economic growth comes through a free market. What I do see is a critique of some theories that assume that such growth must lead to helping the poor. What he’s saying is that the rising tide doesn’t always lift all boats because the system is often rigged. It isn’t free. But we refuse to see that because we have turned our defense of free market capitalism into an idol. No economic system is perfect but we can’t possibly admit that because it would betray a weakness to those who oppose our viewpoint on the economy.

What Francis sees–and we must too–is that in many ways the system has been rigged for the benefit of a few. Have we all ignored the news of the past five years? Have we forgotten Lehmann Brothers, Bernie Madoff, Fannie Mae, mortgage-backed securities, Countrywide Loans, self-serving deals between politicians and the captains of industry, and the millions of people who have been left unemployed and lost their homes? And that’s just in this country. I was never a fan of Occupy Wall Street, but they weren’t entirely wrong: There was some dirty dealing and manipulation going on. They just failed to point out that the problem is bipartisan. The Democrats are no better at this than the Republicans were, and are probably even worse as far as being in bed with those who take advantage of us all.

Have we all forgotten the tales of Wall Street excess, of investment bankers rolling in millions of dollars of bonuses earned on the back of bad loans to those who shouldn’t have received them and the manipulation and dismantling of companies that once employed thousands?

The worship of the ancient golden calf (cf. Ex 32:1–35) has returned in a new and ruthless guise in the idolatry of money and the dictatorship of an impersonal economy lacking a truly human purpose. The worldwide crisis affecting finance and the economy lays bare their imbalances and, above all, their lack of real concern for human beings; man is reduced to one of his needs alone: consumption.

After seeing Black Friday’s excesses and the creep of Christmas shopping into Thanksgiving day, not to mention the crass commercialization of the season dedicated to the birth of Christ, how can I possibly dispute that consumption and consumerism are the highest values in our society today when it comes to economics.

Ah, but Pope Francis espouses a Communist ideal when he quotes favorably from St. John Chrysostom, some say: “Not to share one’s wealth with the poor is to steal from them and to take away their livelihood. It is not our own goods which we hold, but theirs”. Then Jesus himself must have been a Commie too: “And Jesus looking upon him loved him, and said to him, ‘You lack one thing; go, sell what you have, and give to the poor, and you will have treasure in heaven; and come, follow me.’” (Mark 10:21) How many of Pope Francis’ critics would be like the rich young man who went away sorrowful because he had many possessions?

Far from saying there must be no rich and no poor, Pope Francis is saying that the rich have a duty to help the poor as much as they can. Of course, what we have it not our own because it comes from God and thus it is true that other can place obligations on us because we are brothers. This is not controversial. It is basic Christian belief.

Judge Napolitano uses the generosity of the rich to the Church as bludgeon against Pope Francis–pointing out that it will be the wealthy who donate much of the $200 million needed to repair St. Patrick’s Cathedral in New York–but Pope Francis is not saying there should be no rich. What he’s saying is what those donors already know: They are giving out of the blessing entrusted to them: “Well done, good and faithful servant! You have been faithful with a few things; I will put you in charge of many things. Come and share your master’s happiness!” (Mt 25:21)

Part of the problem inherent in all this back and forth over this small section of this document on evangelization is that we have all been so subsumed into the political wars, so divided into camps that will admit no compromise, that we either draft the Pope into our political party or damn him for joining the other. Sometimes both at once!

But the Holy Father isn’t playing our game. He’s got bigger fish to fry, namely a world in which billions are still scratching out enough to survive day to day, while the privileged few of us live in relative luxury. What he’s screaming from the rooftops is not that one theoretical economic system is better than another, but that whatever system we use, we’ve got to use it better and in a way that respects the individual human person because there’s still way too many poor and starving and destitute and excluded people in this world that has the capacity to provide for all their needs.