Liberal Dem doesn’t get why gas tax is bad idea 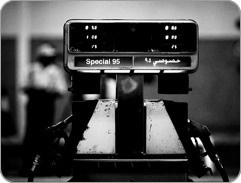 What is it with liberal Democrats? They seem to believe (a) that the taxpayer has a bottomless pocket from which they can continue to draw tax after tax after tax and (b) that basic economics don’t apply to taxpayers and that their behaviors aren’t changed by changing circumstances.

The latest evidence of this liberal blindness is a proposal by a local Democrat legislator who proposes raising the gasoline tax another 12 cents in order to provide more funding for the ailing MBTA public transit system.

“The purpose is to put the T on a firm financial footing,” Wolf said.

So the T is saddled with debt and deferred maintenance costs such that even with massive taxpayer subsidies and rising fares, they can’t keep pace with costs. But look at this proposal. Wolf would raise the state portion of the gas tax from 23.5-cents per gallon to 35 cents. Doesn’t sound like much? Say you drive 15,000-miles per year—which is low by most standards—and you get, say, 20 miles per gallon, another not unreasonable assumption. Some get better, some get worse. That means a conservative 750 gallons of gas per year. That’s an additional $90 per year, and probably twice that for the average two car family. That $200 per family is not a lot, you say? Well, add that on top of increased costs of tolls on all toll roads and increased sales tax (we went from 5% to 6.25%) and increased meals taxes and airport departure taxes and excise taxes on cars and towns raising property taxes to cover shortfalls there and new trash fees and so on and so forth. Not to mention the increased costs for goods by the corporations selling them to us. Don’t forget that gas tax doesn’t just affect the gaslone you put in your own car, but also increases the cost of goods shipped by trucks, i.e. everything.

And while gas prices have dropped to a comfortable $2.59 per gallon right now—not as low as it’s been recently, but still low thanks to the recession—let’s not forget the summer of 2008 when gasoline was hit $4.00 per gallon. Gas prices won’t stay low forever.

So that’s the “bottomless” pocket part of this particular brand of tax-and-spend idiocy. What about the behaviorial elasticity?

Here’s the fundamental problem with Wolf’s proposal: If you raise gas prices, you will convince more people to stop driving and start riding mass transit. Since ticket prices don’t cover the cost of transporting each passenger, then each new passenger drives the MBTA further into the red. So as fewer people drive, that’s less money from gas taxes and more costs from increased ridership, thus exacerbating the problem you’re trying to solve. Don’t think that will happen? Consider that in the summer of 2008, that era of $4 per gallon gas we just mentioned, MBTA ridership levels hit record levels. Raise the gas prices again through a new tax and it will happen again.

So what do we do about the MBTA’s budget woes? Well, just conside that of the 6,488 employees of the T in 2008, 440 of them made $100,000 or more. A major part of the budget woes at the T and other state agencies is the incredible level of waster and inefficiency as well as the massive political patronage, stacking the payroll full of cronies and relatives earning ridiculous amounts of money on the taxpayer dime, followed by a retirement pension that would make the the United Auto Workers blush. It takes 833,333 gallons of gas, at the 12-cents per gallon tax rate (since the other 23.5-cents already goes to other programs), to pay just one of those $100,000 salaries. And we have 440 of those salaries to pay.

Of that 750 gallons per year we figured that average car used, more than half of the new taxes on it would go just to pay the top 440 salaries at the MBTA. And they wonder why they’re in the red.