How I sacrificed an iPad for Lent, and God wouldn’t let me forget
4 comments
Share:FacebookTwitter
Faith and LiturgyHumorMacs, iPods, and iOSTechnology 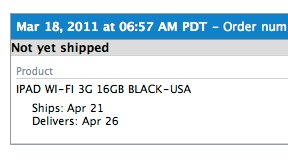 I’d been anticipating the release of Apple’s iPad 2 for months, even before they’d officially announced it. I’d see the launch of the first iPad last year and I’d even got to use some that belonged to others briefly and I’d known immediately how such a device could contribute to both my work and personal lives. The iPad fills a gap between my iPhone and my MacBook Pro perfectly.

I’d been talking about the iPad with Melanie non-stop about the iPad since last year about what a great tool it is. I also started hinting that I thought we should get one. She agreed on the awesomeness of the iPad, but was concerned whether we could afford it. I’ve been working the numbers ever since and had been waiting to see what our tax refund looked like and as of late January I knew we could afford it. So we talked about it.

So, you have to understand something of the way Melanie and I converse. Melanie is the silent thinker. I speak, she listens and then says something back. I speak again and she doesn’t say much. I make a definitive statement, like “So, we should get it.” She doesn’t say anything. My mistake here is thinking that silence is assent. (And I will concede there may be some willful blindness on my part.)

Fast forward to March 11, the first Friday of Lent and the day Apple is launching the iPad 2. There is huge demand and lines for the product as people wait outside stores for the launch at 5pm. I couldn’t be there because I was working on our new radio program, The Good Catholic Life, but as soon as I was done, about 6pm, I went straight to the Apple Store across the street. Madness. A huge line and the Apple employee told me all they had left was a model I didn’t want. I headed straight for Best Buy, which was also selling them that day. Score! They had models in stock and only a few people were ahead of me.

As I was waiting in line, I got a text from Melanie: “Coming home soon?” I text back, “Soon. In line for iPad.” Her reply: “Seriously? I didn’t know we’d agreed on that.” I may not be the swiftest guy on the block, but I knew what that meant. I got out of line, got in my car and headed straight home.

After dinner and after the kids were in bed, we sat down and had a conversation. It was a calm and rationale discussion that ended with me agreeing that we should save the funds for something else. I was disappointed, sure, but I agreed. I’d been thinking for weeks by that point that I was getting an iPad and suddenly that wasn’t going to happen. But you suck it up and move on. In the end, it’s just a gadget and there a lot of people getting by with a lot less than that.

Although it was the third day of Lent by that Friday, I hadn’t yet decided what I was giving up for the season. I decided to offer up the iPad as a sacrifice for Lent, turning my disappointment into prayer for the needs of my family. It’s not curing world hunger, but it was something.

But then something wonderful happened on Saturday. Melanie pulled me aside and told me she’d been thinking and, if I was really sure that we had the funds available, I could get the iPad. The skies parted, angels sang, and the sun shone down.

Of course, I forgot my Lenten sacrifice.

I ran to the computer to see if I could order one online. Ack, backorders were listed at 3 to 4 weeks. On Monday, I went to the Apple Store. Sold out, no idea when more would come in. I went back a few times, even first thing in the morning and finally learned that people were lining up at 5am every day and getting the few iPads coming in each day. I resigned myself to ordering online finally, having lost a week in the process.

The other day as I was checking my order status for the umpteenth time, I suddenly remembered my Lenten promise to God to offer up my disappointment at not having an iPad. With a sneaking suspicion, I checked again the expected date of shipment that Apple gave me: April 21. Holy Thursday. Delivery date: April 26. Easter Tuesday.

I had to laugh. Even if I’d forgotten my Lenten promise, it seems God had not. I really was giving up my new iPad for Lent.

So now, I’m waiting every day for the end of Lent to come, awaiting in anticipation of Easter glory for more than one reason. And as I start to see friends get their iPads, I feel that pang of envy. I have not yet mastered my feelings, but this is good practice.

I’m so glad God has a sense of humor. And I’m glad I have a patient, understanding and wonderful wife who puts up with my nonsense. I couldn’t be more blessed.

Update: I just received an email notifying me that my iPad has shipped early from Shenzen, China! And when will it arrive? Yep, at the end of Lent.