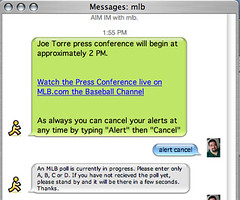 Last night I started getting these ‘bot IMs from user ‘mlb’, i.e. Major League Baseball. I don’t want them. I don’t recall signing up for them. Why can’t I stop them? "Blocking" them, using AOL’s “block” command, doesn’t work.

In the latest one above, it says that I can cancel "at any time" by typing "alert" then "cancel". (I also did the obvious next step of sending them as separate IMs; same result.)

Apparently, when they say "any time" they don’t actually mean "any time."

N.B. I waited a while and tried again. Then it worked.