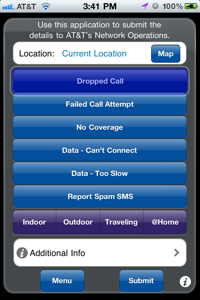 One of the biggest annoyances of the modern age has got to be spam: Spam emails, spam faxes, spam tweets, spam blog comments, and spam SMS texts.

A few years ago, when Melanie and I were first married and I brought her onto my cell phone account, she started receiving spam SMS texts. What’s particularly annoying about spam SMS is that unless you are paying for unlimited texts, you’re paying to receive them. The only cost of the others is the time it takes to clean them up, except for the spam faxes, but at least those are illegal now.

Anyway, when we brought these spam SMS to the attention of AT&T Wireless, we were surprised to learn that there was nothing we could do about it. they told us that there was no way to block a particular SMS sender, even if you know the number of who it is that’s spamming you. The only solution, they said, was to remove SMS from your phone all together. No receiving, no sending at all. It wasn’t a big deal at the time since Melanie didn’t use the feature so we had it blocked and that was that.

When Melanie got her first iPhone last year, I elected to turn texting back on for her account to see if the problem got better. Since then, she’s only received one, but then you never now if she’ll start getting a dozen a day next week.

Now, as for my phone, I’ve been receiving a handful of spam messages every month from the same source—“Replacements, Ltd.”—addressed to the same person “Dorothy Bettinelli”. I don’t know Dorothy Bettinelli. I don’t know if she’s real. All I can assume is that these guys found our names and phone numbers in proximity on the Internet and now I’m getting spam addressed to her. There’s never been so many of them that they are in danger of using up my allotment of text messages each month, but it’s been a constant annoyance, like a mosquito flying around your head at night while you sleep.

Finally, it seems that AT&T may be doing something about. AT&T has had an app for the iPhone for a while now called “Mark the Spot”. Originally all it did was allow you to send a message to AT&T when you had a dropped call or bad connection to let them know exactly where it occurred so that they could (theoretically) fix it. Recently, the app has had an update, which allows you to report several errors: 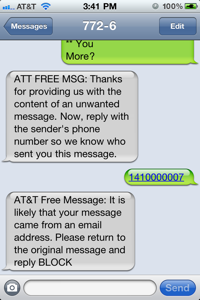 That last one is the one that really got my attention. When you click on it, the app tells you to forward the spam SMS to SPAM (7726). When you do, you get a message back thanking you for letting them know and then asking to reply with the phone number of the spam’s sender.

The spam SMS I keep getting is not a working phone number, but is probably a computer connected to an Internet-to-SMS gateway server somewhere so after I send the number, AT&T replies that “it is likely that your message came from an email address.” They then tell me to reply to the original message with “BLOCK”. There’s no other instruction, but apparently, replaying BLOCK will block the originator from sending you texts anymore.

Of course, it’s not perfect. It’s not difficult for the spammer to switch to another sending number, nevertheless at least there’s a limit to the numbers they can send from and I’d rather have the psychological comfort of being able to do something rather than remain powerless before the spammer.

So if you’re an AT&T iPhone user and you have the problem of spam SMS, get the app and start blocking it. It might make your life better, but at the least it will give you a little satisfaction.

Update (6/7/11): This morning I received an email from Replacements, Ltd., the company whose name is on the SMS texts I’ve been getting for several years.

Our press clipping service picked up a link on your blog where you mentioned getting annoying spam texts from Replacements, Ltd. sent to Dorothy Bettinelli.

First of all, I would like to apologize. We do not, as policy, send SMS messages to any of our customers, but occasionally a customer will provide us with an email address that is actually an email for their cell phone ( for example:1112223333@txt.att.net) and that will cause our system to generate a SMS message. In most cases, we are able to catch these and reach out to the customer for a legitimate email address or another method of contact. We have a Dorothy Bettinelli listed in our database, but the only email associated with the account is a Gmail address. I’m not sure how these are being routed to your cell phone.

Are you still receiving these texts? I want to help correct this situation as quickly as possible.

I’ve responded to him with my thanks and I hope that we’ll finally be able to resolve this problem. I do sort-of recall trying to track down the company back in the day and coming up empty. I honestly did not consider that this was anything but spam. I’m still a little concerned that somehow my phone number got associated with their email list. Is Dorothy Bettinelli a real person? Did someone sign me up for a list to harass me, with Replacements, Ltd., as the innocent victim?

I’m hoping that Brad Newton will be able to resolve the situation. It should be as simple as searching through their database for my phone number. However, it could also be that there is something outside their system which is receiving their email and forwarding it to me. Time will tell.