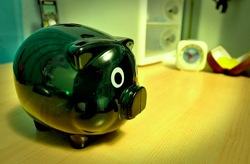 Isabella received a nice, crisp dollar bill for her birthday back in May, which was very exciting for her as it was her first money of her own. She spent a lot of time thinking about how she could spend it, and eventually she did spend it at Target… on a gift for her younger brother, Benedict.

This is very admirable and praiseworthy. (She has been emulating a book my mom gave her about doing small kindnesses for others.) But after she spent it, she was sad to realize she had no more money, which while being an important lesson, is very hard for a little girl who now must wait months until Christmas or even longer to her birthday to replenish her store.

So I decided to teach her about working for pay. I’m not a big believer in allowances, as it’s often money for doing what the children should already be doing by contributing to the household as they can. But I do want to teach Bella that if she does something above and beyond what she’s expected to do, she can receive remuneration.

Now, I don’t want to discourage generosity of spirit, so we’ve made clear that she doesn’t get paid for doing good deeds, but we do encourage it. Instead, we will agree on the task and the pay in advance and she will only be paid upon completion. She can ask us if we have jobs for her to do, but if we don’t (because this could get quickly out of hand), she’ll just have to wait until we do.

Obviously, this will need refinement as we go along. Today I offered the princely sum of $1 (the usual pay for most jobs is a quarter) to pick up all the toys and other items laying about in the yard so I could mow. I hate doing this backbreaking work so it was worth it to me. Bella only got so far, however, before she declared herself too hot and tired to continue. So rather than pay her nothing, I decided she ‘d done half the job and she got paid half, which she was happy with.

I look forward to continuing the economics education of the kids with a lesson on saving and tithing and seeing where we can go with this.