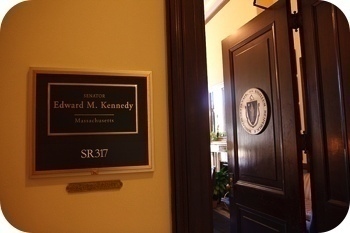 With the likelihood growing that Ted Kennedy will be unable to fill out the rest of the term of his US Senate seat, he and others are calling for a change in the process for selecting a replacement, specifically a replacement acceptable to each of the political power brokers in Massachusetts. Since a Senate seat in this seat is apparently a lifetime sinecure, a lot is at stake.

The irony is that in 2004, when John Kerry was a hairs’ breadth from winning the US presidency (we dodged a bullet then, didn’t we?), the age-old procedure for replacing him was like that of most other states: The governor would appoint a replacement to fill out his term. Of course, since the governor at the time was Repulican Mitt Romney, Democrats couldn’t possibly allow him to appoint a Republican. Oh sure, they couched their rhetoric in principle, but it was all partisan politics.

“It’s always preferable to allow voters to fill these important positions,” Straus said. “I would think the governor who is publicly very much against patronage appointments, would be in favor of this.”

And when Republicans later called for Kerry to resign—before the law was changed—because he had missed so much time in the Senate while campaigning, Democrats again appealed to principle:

Added Kerry campaign press secretary, Michael Meehan: ”Massachusetts Republicans have tried for decades to defeat John Kerry, and that has failed. Now they hope and pray that John Kerry will quit. Well, that won’t work either. Elections work best when the people do the electing, not the politicians.”

When the bill was finally passed and Romney’s veto overriden, only former House Speaker Tom Finneran was honest about the aim of the bill:

“Inevitably, whether it’s a Democratic governor or a Republican governor, it’s a political deal,” Finneran said. “It’s very raw politics. Each side was just putting on a little bit of a show for the other side.”

But his fellow Democrats continued their pious ramblings:

During the House debate, Representative William M. Straus, the Mattapoisett Democrat who chairs the Election Laws Committee, said that overturning Romney’s veto would send a message that voters “will decide … who will represent you in the United States Senate.”

“One person, whoever happens to be the governor at this particular time, will not make the decision for you,” Straus said.

Democrats in the Senate offered the same argument.

“We have always felt that this position is significant enough that no one person should make that determination,” Senate President Robert E. Travaglini said after the vote in that body. “It should be decided by the people.”

That was then. This is now.

But elected Democrats need not worry about taking the lead on this issue because the Boston Globe’s editors are leading the charge:

The immediate matter for the Legislature is to ensure adequate representation for Massachusetts residents in the US Senate. Kennedy himself has offered state lawmakers an elegant solution: change the law to allow the governor to make a temporary appointment with the assurance of an “explicit personal commitment” that the appointee would not run for the office. Massachusetts would remain at full strength in the Senate, the prospect for health care reform would remain alive, and the voters would have their final say on a new senator within a few months.

How long do you think it would take before the appointee reneges on his “explicit personal commitment” because the voters of the Commonwealth need him to remain in office? Where was this concern from the Globe for adequate representation and this “compromise” proposal of both an appointment and special election when Romney proposed in 2004? Were there no significant policy proposals before the Senate then? The difference is that the Democrats’ majority in the Senate is razor-thin today and they don’t want to be even one seat short for as many as five months.

The editors also know that Democrats are feeling vulnerable to charges of hypocrisy so they provide cover there too.

Everyone already knows that blatant politics compelled the Legislature’s Democratic majority to create this mess in 2004. If anything, this is an opportunity for lawmakers to redeem themselves by putting the interests of representative government and health care reform, a hallmark of Massachusetts, above Beacon Hill politics.

The interests of representative government are served when elected Legislators act like representatives of the voters, not oligarchs seeking to consolidate their own power. But if I’ve learned anything as a Massachusetts voter over the past 20 years, it’s that our politicians listen to us only when the voters’ interests coincide with theirs, not vice-versa. (See also, tax cut referenda, same-sex marriage constitutional amendments, etc.)

The problem is that the sheep-like Massachusetts voter won’t ever vote in his own best interest but continues to pull the lever for these entitled cranks firmly ensconced in their Legislative seats, grasping the levers of power in a death grip.

N.B. Republicans have not covered themselves with glory in this debate either. In 2004, they opposed the change in that law using the opposite of the rhetoric they now use to oppose changing it now.