A priest’s recollections of Pearl Harbor 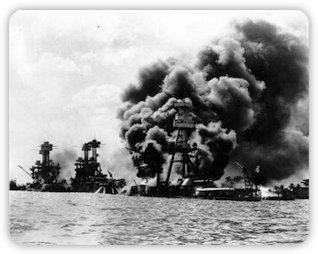 The late Father Eugene Morin grew up in Quincy, Mass., but was serving as a priest at Our Lady of Peace Cathedral on December 7, 1941 and shared his recollection of the “day that shall live in infamy” in a letter he wrote in 1978. Fr. Morin died in 1986.

The letter begins by recounting the facts of the day, the toll of the dead and the ships sunk, and how the US responded to the sneak attack. But then he gives his own personal account, how he celebrated the early Mass that day and how another Mass was interrupted by the sounds and then the news. How they waited for news of what was happening in those days before the Internet and 24-hours TV news. How the priests were called to the makeshift hospitals set up in a Catholic high school and a convent school to provide Extreme Unction to the injured and dying.

One thing I must say and I say this with a great deal of admiration for our young servicemen. Every one died a hero’s death. Strange as it may seem when death approaches we always think of those we love most. Those perhaps we may in our youth and forgetfulness have neglected. The thoughts and memories of all the young men I prepared for death, I am proud to say were about their dear parents. They wanted them to know how much they loved them and what they meant to them while they were growing up but could not express in words due to shyness the love, kindness and understanding they had in their young hearts.

In all my priestly life I have never heard such sincere, thoughtful and prayerful confessions. All of those I attended during the thirty-four hours I worked at Sacred Hearts Convent School went to meet their heavenly Creator well prepared to merit an eternal reward. It is an act of heroic sacrifice to give one’s life for one’s country. During my stay at this temporary hospital I took care of more than 500 young men. Many of them I gently closed their eyes in death, while some I had to leave, leaving this duty to others.

When other priests took their places in the hospital, they returned to the cathedral and, after a short rest, spent day and night hearing confessions of the people who flocked to the church for solace in an uncertain time, especially the servicemen preparing to face their new enemy. Remember, most of these people had no idea if a Japanese invasion of the islands was imminent.

He also recalls that under martial law, gatherings of more than 10 people were not allowed and so there very few public Masses, even on the feast of the Immaculate Conception. He also tells that tale of having dinner with Admiral Chester Nimitz and Bishop James Sweeney when the admiral received the call that the Battle for Midway had begun. While swearing them to secrecy, he asked the bishop to call all rectories and convents and ask for special prayers, without saying what the prayers were for. Fr. Morin ends with another tale of heroism:

Regarding the USS Arizona I have mentioned it on the first page of this article. However, I would like to mention that the Chaplain, Father Schmidt, was a very dear friend of mine. He and I had dinner together the night before the attack. To be exact it was December 6th, 1941.

Father Schmidt was vesting for Mass in one of the mess rooms when the attack began. As the ship began to sink after so many direct hits he helped many of the young men to escape through the port holes of the ship but when it came his turn to leave he told other young men to go ahead of him. He was not able to escape and thus he lies with the other young men who were trapped in the ship when it sank.

May the souls of the faithful departed, through the mercy of God, rest in peace.