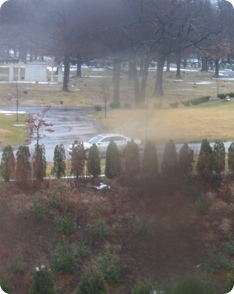 In June 2008, our offices moved from Brighton to Braintree, to a relatively new office building that sits on the edge of an office park, but is right next to a large cemetery. For some reason that felt right. Memento mori, after all, was a common refrain of medieval scholastics. And so the window next to my cubicle (excuse me… “workstation”) looked out over the cemetery and specifically its newest section.

On the day we moved in, my colleagues and I noticed a group of cars parked next to a gravestone. It was obviously not a funeral. In fact, it resembled a picnic. The cars’ occupants were sitting in lawn chairs next to the grave under the sunny June sky. We remarked at the strangeness of it, but figured they must be friends and relatives of the recently deceased giving him one last goodbye.

But over the following days and weeks and months, I noticed a pattern. Every day,there was at least one car next to that grave, usually around noon and for a large part of an hour. Sometimes there were two cars. If it was sunny and warm, a woman could be seen standing next to the grave or sometimes sitting in a chair. If it was raining or cold, she would remain in the warmth of the car. Who is the woman keeping a daily vigil?

Finally, curiousity got the better of one of my co-workers and me so one day, after the woman had gone, we hopped in a car and drove around to the cemetery’s entrance and then to the grave we had been keeping watch over and suddenly it became clear. The gravestone was carved with images of toy cars and checkered flags and the dates told us that boy buried here had been only 13 when he’d died. The woman we had seen must be the mother of the boy, who we’ll call “Timmy”.

Back at the office, I googled Timmy’s name and date of death and found a newspaper article detailing his untimely end. He was the only child of a single mom who had remarried. One day, not long ago, he had been riding in a local park with his stepfather, when he lost control of his bike and crashed into a tree. Despite wearing a helmet, he was killed.

And so this woman, this mother, comes every day to visit the earthly remains of the child she lost.

Melanie and I have discussed the unique grief of a woman who loses an only child versus a woman with many children. The loss of a child is an anguish that is as deep in either case, but the mother of many children is pulled forward into daily life each day by the needs and love of her other children. The mother who loses her only child could be caught in the whirlpool of grief without an anchor to pull herself free.

The mother still keeps her lonely vigil 18 months later and longer and every time I see her, I say a prayer for her. I don’t know if she’s Catholic or even religious, but I hope that the presence of the Eucharist in our building’s chapel and the many Masses and prayers offered in this place are a kind of consolation to her, even if she does not know about them.