A Mother Who Weeps: Our Lady in Bouguereau’s Pieta
2 comments
Share:FacebookTwitter
Art and ArchitectureFaith and Liturgy

A Mother Who Weeps: Our Lady in Bouguereau’s Pieta 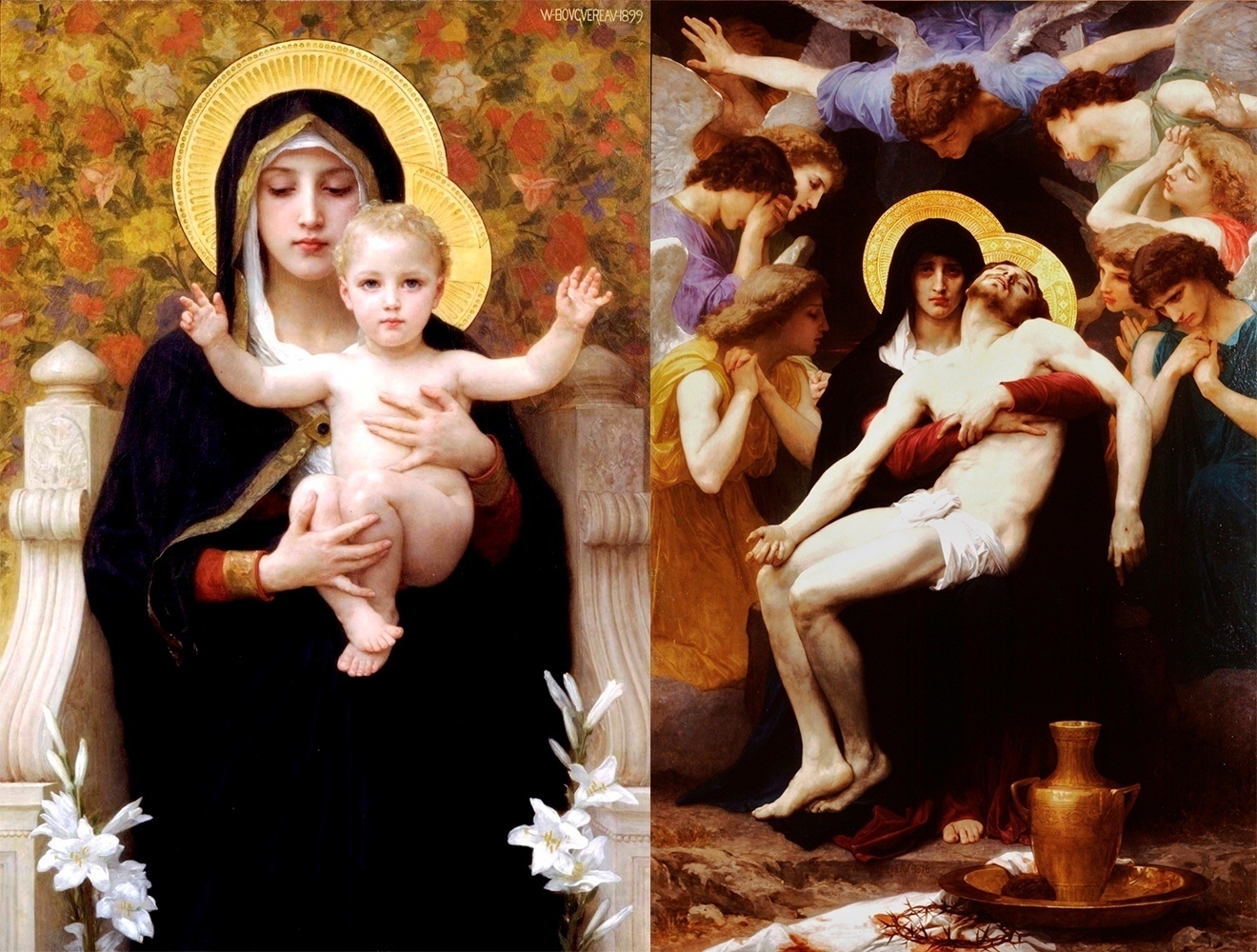 [lead dropcap="yes"]At the start of this Holy Week, I’ve been contemplating two different pieces of religious art by the same artist, William-Adolphe Bouguereau, a 19th-century neo-classicist that some associate mainly with portraiture and paintings of naked ladies, but he’s also painted some fairly well-known religious art.[/lead]

He was a devout Catholic, who especially in his latter years as he suffered personal loss of the death of his wife and 4 of his 5 children, turned to religious subjects often to express his grief and faith. That’s what makes the two pieces I’m contemplating especially relevant this Holy Week as they show the same subjects separated by about 30 years: Jesus and His Mother.

The first is The Virgin of the Lilies (or the Madonna of the Lilies) (1899), which depicts Mary and the Christ Child and is similar to another work by Bouguereau, The Virgin with Angels(1900). Both show the Blessed Mother, clothed in black robe, holding the Child, her eyes cast downward, as if she is presenting him to the world and willing herself to fade to the background as her Son becomes the focus of attention. She is demur, quiet, understated, calm.

Contrast this with the powerful and emotional Pieta (1876). In this painting, Mary is again clad in black and again holds her Son, but now he lies limply against her, dead and recently removed from the cross. She grasps him in a close embrace, in contrast with the open embrace we find, for example, in Michelangelo’s Pieta. This is not a Mary offering her Son’s sacrifice to the world. Look into her red-rimmed and weeping eyes and see the world-wrenching sorrow of a perfectly pure heart pierced by the sword of our sin, a sword that struck down not us, the deserving, but Christ, the Innocent One. Her eyes accuse, not with anger, but with the sorrow of a mother who grieves one Child who died in the place of her other children. Surrounding them is an arc of weeping angels, a rainbow of them, evoking the rainbow covenant with Noah, which Christ fulfills, reminding us that rather than wipe us out to wipe out sin, God instead sends His Son to pay the price.

Two images of a mother and a Son portray for us the complete arc of the story of Christ, who was born into this world, taking on our flesh, sanctifying it with His innocence, made possible through the fiat of a woman, and who died for us, conquering sin and death in the process, but at the cost of the spilled Blood of the Second Person of the Trinity and the broken heart of His Mother.

As I pray this Holy Week and think about my own role in the Passion, my own sins piled atop the towering pile of humanity’s debts paid by the Savior, the eyes of my Blessed Mother haunt me, accusing me in her gentle way, of every iota of pain they added to the suffering of Christ upon the Cross.

And I am convicted.