Yearning for the Eucharist
Share:FacebookTwitter
Faith and Liturgy

Yearning for the Eucharist 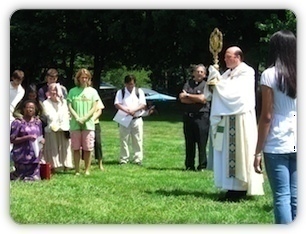 Yesterday was the Proud2BCatholic Family Festival, the eighth annual one, and it was lots of fun as usual. And as usual I was grateful to meet several of you there, both and new and old faces (Not that I’m calling any of you “old” old, if you know what I mean.) Melanie has a lot more to write about the day, but I wanted to pull out one it that deserves special attention, because it engendered some thoughts and conversation. What she describes occurred during Communion at Mass, which was celebrated by Cardinal Sean O’Malley from the main stage, overlooking the field of people gathered.

After communion I’m kneeling, cradling my now awake but still drowsy baby, when I notice a slight commotion in the communion line nearest me. A mother has just received and turns back to her daughter who stands before the priest. They were the last two people in that line. The little girl stands several feet back from the priest, her hands pressed to the sides of her face— like Munch’s painting of The Scream— fearful. As I watch, I begin to suspect she has Down syndrome. She stand there, trembling, yearning. Her eyes pool with tears and her whole body seems filled with conflict. Afraid to approach and yet unable to turn away. Her mother beckons. The priest takes a hesitant step forward, hand outstretched in welcome, benediction. The girl jumps back like a nervous cat, startled, stumbling, afraid. And yet she stares so longingly. They remain in tension. The priest moves again, the girl tries to move and can’t, tearful, fearful. Finally, the mother turns and begins to walk away and after another moment the priest lifts his hand, blesses her with the sign of the cross, and then also turns, reluctant but acknowledging the impasse. And the girl crumbles to the ground in abject anguish as her mother rushes to console her. Tears roll down my face and my heart yearns toward her, praying. She stumbles away, cradled in her mother’s arms. Tears. Anguish. Raw.

Later Dom articulates what my heart understood but my mind couldn’t quite grasp: In her you could see what we all should be at this moment— the fear and awe of the presence of God that made it impossible for her to approach, the hunger that made it impossible for her to leave. She seemed to see, more clearly than any of us, Him Who is Present there.

There was something about the reaction of this girl with Down syndrome that really struck home. It was as if she saw clearly the reality that we see only darkly. If we only saw as truly Who we are approaching in the Eucharist, maybe we would stand frozen in awe too. And yet something in us would draw us forward, unable to resist His Presence and His call, His offer of a divine intimacy. Something to meditate on.