The nicest gift ever 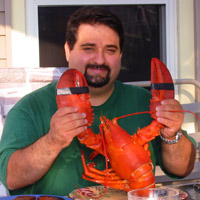 Anyone who knows me knows I like lobster. I don’t just like it; I love it. And I’m not one of those wimpy tourist-types who eat the tail and claws and walk away. When I’m done with a lobster, the seagulls fly past because there’s nothing left for them.

My (soon to be former) roommate Paul knows I like lobster, too. And since I’m moving out tomorrow, he surprised me with a special going-away dinner: lobster! But not just any lobster: a 6-1/2 pound monster! This was the biggest lobster I’ve ever eaten. Just look at the picture there. The claws are almost as big as my head. The legs are almost as big as the arms on a normal 1 lb. lobster. What a treat.

Of course, I couldn’t finish the whole thing, so I made a lobster omelette for breakfast, and I think I’ll be having lobster salad for lunch. Yum. And don’t let anyone tell you that big lobsters are tough. This one was just as tender as a normal-size one. I think most people overcook big lobsters, thinking they have to take so much longer. A 1 lb. lobster takes 11 minutes to cook in a boiling pot of water. A 6-1/2 pounder should only take 30 minutes. Really, lobster is not as dense as say chicken or beef, so it doesn’t take as much time. People tend to think of it like meat and not like fish.

After dinner, we opened up some Scotch, lit some cigars, and reminisced during our last night to be able to do that, at least in the house. When Paul gets married there won’t be any cigar smoking in the house. And I can’t smoke inside at my new place. But it’s been a fun two years for Paul and me, one that’s seen a lot of changes in our lives. I’ll miss this little house, but the road goes ever on and new adventures are always just around the bend.

Now I just need to look up recipes for lobster salad…