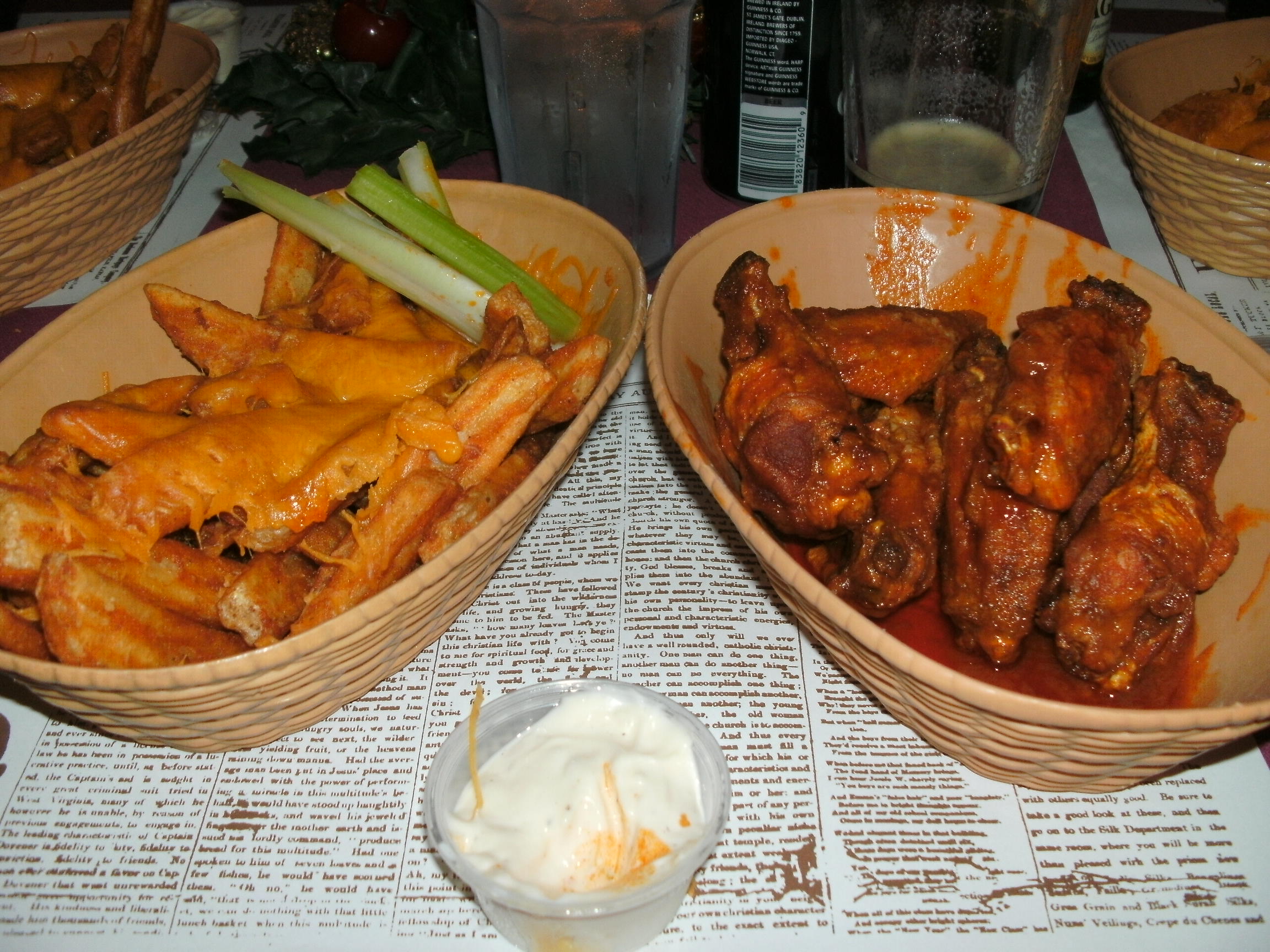 I thought for sure I’d told this story before, but I can’t find it in the archives and it’s too good not to be recorded.

[lead dropcap="yes"]When I was a student at Franciscan University of Steubenville in Ohio back in the mid-90s, there was one place that was famous as an off-campus destination: Drovers Inn.[/lead]

Drovers was built originally in 1848 to house drivers on the wagon trail through West Virginia. Today it’s a restaurant and lodge in the hills across the Ohio River from the Steubenville area. It has a regular dining room on the main floor, but the basement has been turned into a great dark, noisy, friendly pub.

Drovers’ wings stand above them all. They are truly delicious and scrumptious.

We made regular trips to Drovers whenever possible, about 30 minutes down the river and then up into the hills. In fact, I was such a regular that the bartenders would acknowledge me by name when I came in, like Norm from “Cheers”. (Every guy should have such a place at one time or another in his life.) The bartenders also liked to joke that whenever I came I was with a group of women and never the same group twice. Now they may have been exaggerating a little, but I did enjoy hanging out with my female friends. I’m not saying I had exclusively ulterior motives, but you could say that part of it was “opposition research”.

The best chicken wings in the world

Anyway, the real point of this story is to tell you about Drovers Hot Wings. For all the dozens of times I’d been to Drovers in my four years in Steubenville, I could not tell you about any other food item on the menu, simply because I wouldn’t waste time on any of them when I could have the perfect food, their Hot Wings.

And when I say perfect, I speak from some authority. I love spicy sauced chicken wings. I’ve had them from coast to coast in all kinds of ways, including some truly hideous variations. Yet Drovers wings stand above them all. They are truly delicious and scrumptious.

You can get them in several degrees of spicy heat: Mild, Medium, Hot, Suicidal, Atomic, Hurt Me. The first three are unworthy of mention; they exist to satisfy children, delicate women, and Yankee fans. The latter three, however, provide some real flavor. Keep in mind that Suicidal isn’t that hot. If you’ve ever had a normal bowl of chili, you’d enjoy Suicidal. My usual level of heat was Atomic. Hurt Me was indeed tasty, but I think that sometimes too much heat can obscure the complex flavors. (Oh yeah, I’m a hot wing connoisseur and snob.)

Enough of the prelude; Let me tell you about the hottest hot wings I ever had. Gather around, kiddies, for the Tale of the Triple-Xtra Hurt Me Hot Wings.

Pride goeth before the fall

I believe it was the first weekend of the fall semester in 1994. The new students had arrived on campus and my friend Randy and I had befriended a couple of very nice lasses new to the graduate studies program. We had pledged to show them around to all the best places, so of course we offered to take them to Drovers. Mighty altruistic of us, I think.

We had been seated and our beers delivered. (Mine was a Sam Adams Cream Stout; I believe that before I convinced Drovers’ to start stocking it, no one else had been selling it in the whole state of West Virginia. It’s awesome to know that a whole state is in your debt.) Then the server asked for our food order.

We requested four orders of hot wings for the table, two large and two small. The ladies requested Hot or Suicidal, I believe.

This next part is a little hazy. I don’t know whether it was Randy or me whose hubris was our eventual downfall, but when the server asked the fateful question, “How hot do you want yours?” one of us responded, “How hot can you make it?” He sized us up for a moment, smirked, and wrote on his pad, “X.X.X. Hurt Me”. He chuckled evilly as he walked away. I had some misgivings, but couldn’t call him back to ask him to tone down my wing order. There were women present after all.

In time our wings arrived, brought not by the server but a fellow in a stained apron. He introduced himself as the cook and he had the same smirk as the server had had. “I wanted to bring these out myself,” he said. “I’ve never made them this hot before and I want to see you eat them.” I’m sure the sweat broke out on my forehead at this point, long before any capsaicin touched my lips.

Fire! My mouth is on fire!

I bit into the wing and recognized the wonderful flavor of the secret sauce. (I once, half-joking, asked the owner for the recipe. Dead serious, he asked for a check for $80,000 in return. It would be worth every penny.) But the heavenly flavor of the wing sauce now had an added layer of heat, but not too much at first. You might expect that the additional heat would have had the subtlety of an exploding volcano, but it didn’t.

No, it was more insidious, lulling you into a false confidence. It snuck in and built up behind your tongue and lips, like a guerilla force behind enemy lines. Then, all at once, the wave of heat hit. I bravely continued eating the wings, not just out of bravado and machismo, but because—despite burning and searing pain—they tasted so darn good! Those wings are that amazing!

Randy and I continued eating, all the while drinking copious amounts of water to quench the fire, despite knowing that water only spreads the pepper, like a burning oil slick on the ocean. One of the first circuits shorted out by spicy food is logic. Soon we were scrambling about the table, looking for water. Randy got up and stumbled to the bar, croaking out a request for liquid salvation. A glass was placed before him to which he replied, “No, a pitcher!”, downing the water anyway.

In time we had to admit defeat and ordered some milder Suicidal wings. Humility is good for the soul, or so they say. Unfortunately, another truth of spicy food is that when you activate the burning sensation in your taste buds then any additional hot pepper—no matter now mild—burns like the original. The Suicidal wings were only slightly less painful.

Working my way through the second order of wings, I was using up handfuls of napkins, wiping the sauce from my mouth and hands. (I was making a good impression on the ladies by now.) That’s when I made my next mistake. Without considering the consequences, I took one of those napkins coated in Hurt Me hot sauce and wiped the sweat from my brow.

It was like painting burning embers onto my forehead.

To make it worse, the dripping sweat carried the pepper immediately into my eyes. I leapt from the table and ran for the stairs, knowing I had only a few seconds to act before I was blinded, and indeed those last few steps into the bathroom were run with eyes closed. Thank God the room was empty and I could splash the wonderful cold water in my eyes to flush out the “toxins” in peace.

By the end of the evening, I was breathing heavy and sweating, sporting bloodshot eyes and puffy, orange-tinged lips. For some strange reason I never got a date with one of the women we were with that night. Go figure.

Spreading the love… and the heat

So while we were sitting in Randy’s living room chatting, his roommate Billy came up from the basement where he lived. (He wasn’t a troll; it was a finished basement.) He and his girlfriend Tamara wanted to borrow Randy’s car to run out for some food at Hardee’s. Randy was amenable and off they went. About 20 minutes later they returned and as Billy walked in we all noticed his orange puffy lips. As we all broke into laughter, I asked, “How were those wings, Billy?”

“Aw man, why didn’t you warn me?” he moaned. He recounted his tale of woe: He and Tamara had ordered at the drive-through at Hardee’s and were waiting for the fellow in front of him to finish his transaction when he noticed the distinctive Drovers Hot Wings package on the floor. “Ooh, I think I’ll have one,” he said to Tamara.

“You’d better not,” she replied. “They’re not yours and you didn’t ask permission.”

There he was, trapped in the drive-through, mouth on fire, a car in front and a car behind him, with nothing at hand to put out the fire. When he finally got to the window, he grabbed his milkshake from the counter-worker and downed it in one long gulp, which providentially is a good way to stop pepper fire anyway.

The next day we were having our weekly potluck dinner and prayer meeting for the graduate/non-traditional student crowd at Randy’s house and we both decided that we should have some fun and put the wings out. Of course, you can’t just put the wings out and let people eat them unawares. In some jurisdictions, that qualifies as assault. Instead, we did something even more dastardly.

We put a sign next to the wings that said: “These wings are really, really, REALLY spicy, so if you don’t think you can handle them, don’t eat them.”

Which, of course, meant that every guy in the place had to try them. Oh, it was hysterical.

I miss them so…

Meanwhile, I had taken my own order of wings home and over the next few days continued eating them, one or two at a time, as much as I could stand at one sitting. Finally, after days of gastrointestinal distress, I came to my senses and asked myself, “What am I doing? They’re good, but not that good.” And sadly threw them away. Those weren’t the last Drovers wings I’ve eaten, but they were the hottest.

It’s been ten years now since I’ve had Drovers Hot Wings of any kind, but give me a minute to think about them and I’ll recall the smell of the sauce and the tangy, spicy taste of them and my mouth will water again as if a plate of the wonderful wings were in front of me now and pretty soon I’ll start looking up plane flights to the nearest airport.

You might think it incredible that any particular food can induce such cravings and near-fanaticism (near?), especially a food that once caused such pain. I can’t explain it, except to tell you that if you haven’t tasted the most perfect hot wings in the world, you just can’t know what you’re missing.

Oh man, now I need to go get a napkin and wipe my mouth.

The photo up top is actual Drover's hot wings and comes from this fine review of Drover's at Cooks and Eats. 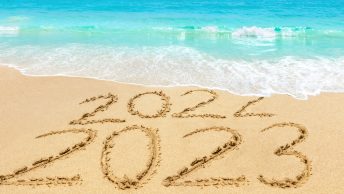