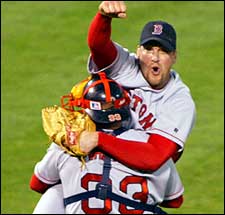 It was a nailbiter to the end, but the Red Sox did the improbable, coming back from an 0-2 deficit to win the American League Divisional Series against the Oakland As. It was another game with heroics and tragedy and an edge-of-your-seat ending. Centerfielder Johnny Damon collided with second baseman Damian Jackson in the sixth inning in a bone-jarring hit that left both players unconscious on the field. Jackson got to his feet woozily, but was eventually able to come back and finish the game, but Damon was placed on a stretcher and taken to the hospital. Latest reports say he will stay overnight, but that he’s fine.

Nomar, a true player, picked up the ball from between his fallen teammates to get the runner out at second and then turned to attend to his mates. Some may criticize him for that, but instincts born of thousands of games over decades of his life made the decision for him.

And in the ninth inning, with batters on second and third, one out, and ahead by a run, Derek Lowe, in a fierce display of heart and pitching might, struck out the final two batters—after taking them to full counts!—and finished it out.

There were so many who contributed: Varitek’s single-shot home run, Ramirez’s 3-run homer, Martinez’s great seven innings of pitching, Jackson’s courageous return, Damon’s fearless go at the ball, Timlin’s perfect relief, and on and on. They played as a team all year and they won as a team.

The last time I saw a team with so much heart, so much unity, and so little credit from anyone other than their fans was the 2001 Patriots. And we know what they did. Is it another team of destiny?

Bring on the Yankees!