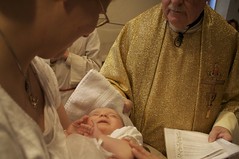 Sophia’s baptism was on Sunday and since we had almost the whole of my family there, we decided to celebrate Isabella’s second birthday a week early. Add to it the fact that it was both Pentecost and Mother’s Day and we had a real party.

The selection of Pentecost/Mother’s Day was just a happy accident. We needed a Sunday that Melanie’s sister Theresa could fly up from Dallas to be the godmother and in which the majority of my family could be there. (My dad couldn’t come and Melanie’s family had been up for the birth and couldn’t come back again so quickly.)

We’d spent the previous few days cleaning and cooking. Melanie made a whole mess of great food, including mango salsa, pasta salad, and pulled-pork barbecue. Not to mention the cake for Isabella.

Everything went without a hitch, it was a beautiful day, and the nice weather encouraged the kids to spend most of their time running around outside.

Okay there may have been one hitch, but it was easily fixed: my pastor forgot about the baptism. When we arrived at the church especially early, I saw nothing had been set up. I know how prepared he usually is, so I went over to the rectory and when he opened the door, I asked him, “Are you ready for the baptism?” He got a shocked look and said, “Oh, is that today?” Not to worry. He’s been doing this long enough that he was able to get everything together in short order. Plus Melanie and I are so laid back, we don’t worry about everything being perfect. 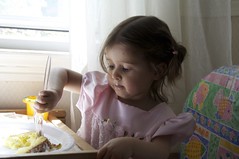 In addition to Melanie’s sister being godmother, we asked my 15-year-old nephew to be godfather. I know it’s unusual, especially since he’s not yet confirmed, but Father made a special exception, knowing my nephew is a sober young man who takes his faith seriously. As evidence, he took a few days to think about it when we asked him to be godfather, just to be sure he was prepared for the responsibility.

Of course, I am my nephew’s godfather, so does that make me Sophia’s god-grandfather?

Isabella’s birthday party was fun too. She blew out her candle and opened much-too-generous presents and marveled at all these kids running around in her house, playing with her toys. She was generally fine with it most of the time, but you could tell a few times she was uneasy.

It was lots of fun and I wish we could have the whole family over more often. Maybe when we get a house we will.