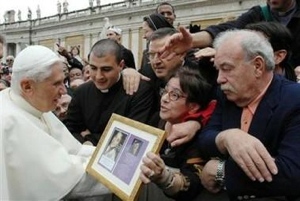 Terri Schiavo’s parents, Bob and Mary Schindler, met Pope Benedict XVI during his weekly Wednesday audience today and presented him with photos of Terri. Yesterday, the met with Cardinal Renato Martino, president of the Pontifical Council for Justice and Peace, who was also outspoken on behalf of their fight to save their daughter, who died just days before Pope John Paul II.

It’s ironic that they had to go all the way to Rome to find bishops to thank for being outspoken on behalf of their daughter’s right to live. Yes, I’ll acknowledge that the Florida bishops’ conference weighed in at the very end of the fight, after it had been going on for years, with a decent statement. But Terri’s own bishop, Robert Lynch of St. Petersburg, was AWOL the whole time, and you didn’t hear much from other bishops around the country on the issue, even as it became a national media event.

But you did hear from Vatican bishops, including Pope John Paul, Pope Benedict, Cardinal Martino, and Bishop Elio Sgreccia of the Pontifical Academy for Life, among others. Too bad the support had to come all the way from across the Atlantic Ocean.