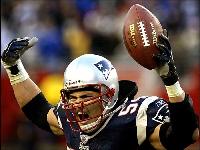 Yesterday’s Patriots’ win over the Buffalo Bills was poetic, right down to the same score, 31-0, they were on losing end of back in September. Back then, after the first game, there was gloating and I-told-you-so’s, and that was just on this blog. Everyone thought the Bills were the team to beat while the Pats were headed for the cellar. Not so. This team is better than that. And yesterday’s game was the period on that sentence.

The New England Patriots are the best team in the NFL right now. They may not have the individual superstars the other teams have, but what they do have is great coaching and great players who work together selflessly toward a single goal, not individual achievement, but team superiority. That superiority is symbolized by the Lombardi Trophy and Super Bowl rings. And they’re not going to let up until they have both of those in their hands again.