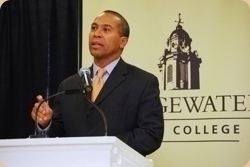 Last fall, Boston Globe columnist Jeff Jacoby wrote about the “Myth of the underpaid public employee,” in which he detailed how those wokring in the private sector not only got plush benefits like padded pensions and other perks, they also just got plain more money.

Consider the lucrative lot of the men and women who work for Uncle Sam. In 2008, according to data from the Commerce Department’s Bureau of Economic Analysis, the 1.9 million civilian employees of the federal government earned an average salary of $79,197. The average private employee, by contrast, earned just $49,935. The difference between them came to more than $29,000 - a differential that has more than doubled since 2000.

When you compared total compensation — income plus benefits— the disparity was even greater. In 2008, the average federal civilian employee earned total compensation of $119,982 vs. $59,908 in wages and benefits for the private sector worker. Federal employees are compensated $2 for every $1 paid to non-government workers. Of course, Jacoby points out, this disparity isn’t limited to federal jobs. Especially in Massachusetts.

Fattening up at the state trough

In an article this week, the Globe reported that there are 1,295 Massachusetts state employees who earn more than Gov. Deval Patrick. His salary is $136,000, which isn’t high when compared to private-sector CEOs, but is comparable to other elected executives within the the states. Even so, how much are we paying in salaries to all these others?

The top salary goes to the executive director of the heretofore little known Massachusetts Biologic Laboratories at the University of Massachusetts at Amherst who earned $649,324 in 2009. The lab makes vaccines for distribution in the state and does research. That seems like something that should be put out to bid for private-sector companies to compete to do. After that is the “executive deputy chancellor, provost, and dean” (yes, that’s a single job) of UMass Medical School: $623,594. And, surprise, third in line is the chancellor of the medical school and senior VP for health sciences (also one job) at $608,674. In fact, 33 of the 34 people in state jobs who make more than $300,000 work at the University of Massachusetts. Three-hundred fifty-two workers made more than $175,000. More than 90 percent of the top 100 work at University of Massachusetts. Nearly all of them work in a state college or university.

And as I said above, it’s not just their salaries that are out of control. More than 100 state workers or their survivors take home pensions of $100,000 or more, as of a Globe report last year.Again, the top earners are former university professors and administrators, but also State Police officers as well. The pensions are of the most expensive kind, which most private-sector employers have abandoned because of their cost. And because of the way they are calculated, they are indeed very costly. Some workers get a 100% pension after 23 years of service, regardless of age. Some have retired while in their 40s and then double-dipped while working another state job. Another costly perk allows workers to earn credit for a full year of service after serving just one day of a calendar year. So, the pension is calculated based on the last 3 years of salary, but that number can be calculated based on the guy working 2 years plus one day past his annual anniversary. If he got a raise in the last two years, that’s a major bump.

No reform on the horizon

Last year, Gov. Deval Patrick promised pension reform and some lawmakers made the usual bluster but nothing happened. Even what they proposed was fairly tame and nothing addresses the out-of-control patronage jobs and salaries in the first place. And don’t look for a change in occupancy of the corner office in the State House to bring radical change. Legislators have a long tradition of giving themselves sweetheart perks for pensions and at least one of Patrick’s two major opponents, independent Tim Cahill, the state Treasurer who most recently was a Democrat, has been known to garner sweetheart pension deals for his well-connected cronies.

It’s going to take some charismatic newcomer and outsider to sweep into office and bring with him the outrage and mandate of the people to bring about wholesale change to the corruption and cronyism on Beacon Hill. I just wonder if there’s even a hope of such a person on the horizon.

Update: The Boston Globe is reporting today that the number of state pensioners receiving more than $100,000 per year rose between 2003 and this year from 33 to 145. At that rate, how long before we realize how ridiculous this is?