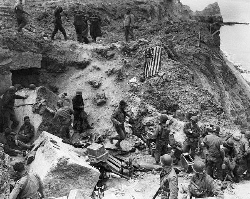 The news of Ronald Reagan’s declining health juxtaposes with tomorrow’s anniversary of D-Day to remind me of Reagan’s great speech at Normandy in 1984. It was a masterful collaboration between a great speechwriter and a great orator, and reading it reminds me of both the man Reagan is and the events he sought to commemorate. If indeed Ronald Reagan dies in the next few days, it will be fitting because our attention is focused on the 60th anniversary of D-Day and what may be the final passing of the Greatest Generation, so fully embodied in Reagan.

Listen to these words of Reagan’s from his speech at Pointe de Hoc on Omaha Beach where the men of the Rangers climbed into the teeth of German resistance, implacably scaling the vertical cliffs in order to put the great guns of the emplacements out of commission.

The men of Normandy had faith that what they were doing was right, faith that they fought for all humanity, faith that a just God would grant them mercy on this beachhead or on the next. It was the deep knowledgeed in all four regions of the country and in over half the states since April. The overall national unemployment rate stayed steady at 5.6 percent, which is almost structural unemployment. More than 248,000 jobs have been created. (These are seasonally adjusted figures, meaning they don’t include season jobs like certain kinds of tourism, landscaping, and construction jobs.) That makes nearly 1.2 million new jobs this year. Even the mainstream media can’t ignore this:

“These blowout numbers so far this year are the convincing evidence that the economic recovery is here to stay,” said Sung Won Sohn, chief economist at Wells Fargo & Co. in Minneapolis. “The last piece of the puzzle, jobs, has fallen into place.”