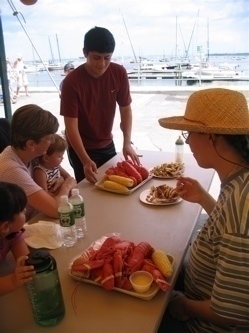 For the last couple of days we’ve been up in Maine again visiting my mother at my sister Francesca’s home. Since the temperatures in Boston were going up into three digits, we thought we’d give the air conditioners a rest and see if the Maine woods were any cooler. (A bit.)

On Wednesday, we drove north to Rockland for the annual Maine Lobster Festival. When we were kids and we vacationed in the Rockland-Camden area every summer, this was a regular stop for us, but I hadn’t been back in years. It’s essentially a county fair/carnival event with a crowning of the Sea Princess and visits by King Neptune as well as lots of rides and silly fishing-themed games (the floating lobster crate race is popular), and of course all that good food.

Sure, there’s fried dough and corn dogs and the usual fare, but above all is the giant white-and-yellow-striped tent where they serve the lobster. Mmmm. It was my first bite of my favorite food this year and boy was it good. I hurried through it though because we had to get in line.

You see, the US Navy had thoughtfully sent one of its warships, the amphibious assault ship, USS Wasp (LHD-1). The Wasp carries a battalion of Marines plus tanks and supporting aircraft and puts them on the beach anywhere in the world the president sends them. It’s a large ship, probably largest next to the aircraft carriers.

Wilting in the sun