Latin in Maine and the Boston-LA connection

I feel like we’ve driven 500 miles this past weekend. Not quite but not far off either. In fact we drove more than 330 miles, first to Maine and then home, then to Newport, Rhode Island, then to a little town in Connecticut and home again. Poor Isabella started squawking every time I tried to put her back in the car.

Of course, it was all worth it in the end because we visited my mom and my sister at their house in Windham, Maine; attended the Mass in the Extraordinary Form of the Roman Missal at the cathedral in Portland; traveled to Newport, Rhode Island to meet up with Karen Hall and drive with her to Connecticut for lunch at the home of the parents of Barbara Nicolosi.

Maine and the Mass of Bl. John XXIII

Let’s start at the top. We headed to Maine on Saturday morning, making good time by avoiding the Friday night rush. first stopped by a farm stand that had some animals out for petting, including a llama that took a liking to Isabella’s hair. Then we took a jaunt by a park and then picked up some lobsters. (Only the second ones I’d had all summer.) On Sunday, my mom wanted to go out for breakfast before Mass, but miscalculated on how long it would take on the holiday weekend and we missed our Mass. Our only other options were the ExtraForm Mass at Immaculate Conception Cathedral at noon or a Spanish Mass at St. Dominic’s at 12:15. Now, mind you Isabella had very little nap the day before, did not get a full night’s sleep that night and now had not had a nap yet.

I was afraid we were on the edge of a full-blown cranky child meltdown. To top it off, I was dressed for a vacation-weekend Mass, not a ExtraForm Mass (i.e. I wasn’t wearing a suit or tie). On the other hand, a Spanish Mass was likely to be a whole lot longer. So we went to my first Mass of the Extraordinary Form of the Missal of Bl. John XXIII.

What did I think?, you’re asking. Um, it was long. And quiet. Yes, I know a low Mass is not necessarily a good first introduction, but my main impression was that I understand the desire for authentic reform. The fact that the prayers were said inaudibly bugged me. Yes, I know I can sort of follow along in a missal (if I’d had one), but only in an approximate “He’s probably saying this prayer now” sense. Certainly, there was plenty of reverence and I was impressed by the precision shown by the altar boys. I didn’t catch the name of the priest who celebrated the Mass, but he was very elderly and when he spoke in English he spoke. Very. Slowly. But when he prayed in Latin hespokeveryrapidly. The homily was a half hour if it was a minute, which is unfortunate because he could have said what he did in 20 minutes if he didn’t. Speak. So. Slowly.

So we went to my first Mass of the Extraordinary Form of the Missal of Bl. John XXIII.

Okay, maybe that’s not fair, since what he did say was pretty good if a bit heavy-handed. Um, Catholics weren’t actually the first people in the New World. I believe that honor goes to the Indians. I think he meant that Catholics were the first Europeans in the New World, not Protestants. And I think Father should have written his homily down beforehand because it was quite clearly stream-of-consciousness and off the cuff, going on until he ran out of things to say.

In the end, I’m glad the Extraordinary Form of the Mass is available and I’m glad that Pope Benedict gave us the motu proprio. But I’m fairly certain that it’s not something I would want on a regular basis, not in that form. Oh and we did not have a child meltdown. Melanie did take her out during part of the homily, changed her diaper in the car, gave her a piece of bagel, and when she brought her back the homily was still going on.

Newport and Connecticut and Karen and Barbara 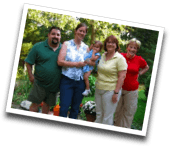 So today, we got up bright and early to head down to Newport. I’d got wind on Karen’s blog that she was going to be in the area (and Rhode Island counts as “in the area” for people from Boston) and asked if she’d be available for lunch during her visit. Somehow we ended up invited to Barbara’s family’s house for lunch and off we went. We met Karen and Barbara and Barbara’s sister at Karen’s hotel. (They were only 15 minutes late; Sorry, Karen, couldn’t resist.) Unfortunately, I’d missed Karen’s last message which told me to call her to get directions directly to Barbara’s family’s house in Connecticut. But it was a nice country drive anyway.

We had a great time chatting, although between Barbara and Karen (and Barbara’s mom, who’s a real pistol!), I’m not sure I got more than a few dozen words in the whole time.

Of course, Melanie and I were constantly having to chase Isabella who managed to destroy only one breakable during the visit. (I’m still cringing.)

Nevertheless, I had great fun listening to them talk about Hollywood and the crazy people they meet and the bizarreness that is the Archdiocese of Los Angeles. We also started making plans for a St. Blog’s Parish Retreat (I just made that up right here) and started a list of the people who have to come. Of course, we talked about blogging and other Catholic bloggers; I’m sure more than a few ears were burning out there.

Our visit ended all too soon, but I’m hopeful we can see Karen in October when she’s supposed to swing through Boston itself.

The great thing about this gathering was how quickly we felt right at home. Being an orthodox Catholic is a small enough fraternity sometimes, but being a St. Blog’s blogger is an even smaller one so you feel an instant affinity and comfort when you meet. It was quite amazing, but maybe not so when you consider what amazing people Karen and Barbara are.

I was also quite pleased by a very nice gift Karen gave me of a first draft script of an episode of “Jericho” she wrote last season. She’d remembered me saying that it was one of my favorite new shows of the season and brought it along. She also brought an only slightly embarrassing photo of one of the stars of “Heroes” taken at a New Year’s Party at his house.

Incidentally, Karen has a very interesting perspective on the intramural Church wars and how she can be friends with Catholic folks she thinks are completely off-the-wall theologically. I’m thinking more about what she said and will have to mull it for some time. Food for thought.