Kerry’s “Dukakis in the tank” moment? 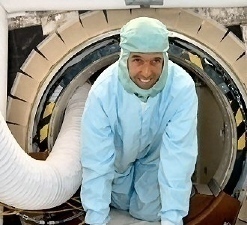 Rich Galen at Mullings.com came up with the best caption for this photo: “Senator Kerry does his famous sperm imitation.”

This photo was on the front page of the Boston Herald this morning. I hope all the DNC delegates had fun waking up to this in the complimentary newspaper outside their hotel rooms this morning. Really, isn’t this the media handler’s nightmare. The first rule of public appearances is to never let the candidate look foolish. That’s what happened back in the 1988 campaign when another Massachusetts liberal running against a Bush for president had a bad photo-op. Michael Dukakis stuck a tanker’s helmet on his head and went for a ride in an Abrams tank, grinning like a fool, and generally looking completely un-cool and un-presidential.