How much do you spend on food and drink? 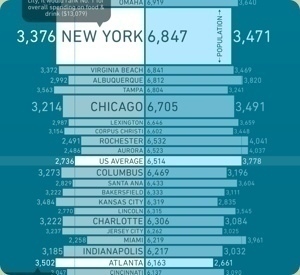 All this information (except for your own spending, of course) is found in the 2010 food spending report from Bundle. I gather that Bundle is a web site devoted to helping people understand how and on what they spend their money, helping us to make better choices. Their report on food and drink spending was certainly eye-opening.

Melanie and I aren’t really budgeters but we should be. What gets us isn’t the fixed expenses, like mortgage and car payments, but the variable and incidental costs like food and books and home improvements and repairs. I know I spend way too much money on lunches in the cafeteria at work. And while what we buy at the supermarket is pretty healthy, it can laos be pretty expensive. One trip to the farmers market, for example, can be two-thirds of a whole week’s supermarket trip—which we also make that same week.

There’s a lot of analysis of the numbers in the full article, as well as a very nice infographic, but the bottom line takeaway that they propose is that regardless of how much actual money is spent, the percentage of total average income is about the same. That is, Americans generally spend about 15 to 20 percent of their total spending on food or about 10-15 percent of their income. The Bundle report authors offer an interesting conclusion that flies in the face of conventional wisdom about how to save money one of the biggest variable expenses in most people’s budgets.

None of this may be groundbreaking. But it affirms long-held suspicions: there’s food at every price, for every budget, and what we spend on what we eat has a lot less to do with how hungry we are — or even what we may actually like to eat — than how much money we have. The savings lesson, then, is simpler than clipping coupons or buying in bulk. It’s to remember that, like many consumer goods, there’s almost no end to what you *could* spend on food. And what you *need* to spend, on the other hand, may be less than you think.

Melanie and I aren’t coupon clippers for the simple reason that we buy very little food that offers a coupon. About half of our food budget is spent on fresh produce, while only about 10-15 percent is processed or packaged foods. (Meats, dairy, and eggs would make up most of the rest.) So about the only way to save would be to create a food budget. Melanie spends about $150 to $200 per week on groceries (unless you live in Boston it’s hard to say whether that’s a lot or a little in comparison), so maybe we should start by setting a budget of $160 and seeing how that limits us. It might mean we don’t eat avocados as often. I’d certainly think long and hard before rejecting a fruit or vegetable in the crisper drawer as spoiled if it meant we wouldn’t see another one of its like for several weeks. We might be much more likely to split a fruit among the children up front rather than just hand one to a child to walk away with. With apparent abundance, there is definitely more waste.

As I said at the top, I spend too much on lunches at work. Our usual method is for me to take the leftovers from the previous night’s dinner, but if there weren’t leftovers or they’re not conducive to carrying to work, then I buy something. It’s just that there aren’t good options. Lunch meats spoil before we use them and pound-for-pound they’re the most expensive proteins in the store. Melanie bakes her own bread, but it doesn’t last long enough to guarantee sandwiches and she doesn’t have time to bake often enough. Store-bought bread often goes bad before the last slice is eaten. We’ll have to get more creative on the lunch front. Maybe use tortillas instead of bread, save chicken from whenever we roast one or make a little extra taco meat to save for burritos. Homemade salads are another area that’s a much better deal brought from home. The cafeteria at work charges $5 per pound for salad. Salad bars are universally the worst option, financially. Paying $5 per pound for a boiled egg or broccoli or garbanzo beans or tomatoes is a losing proposition all around.

The food budget isn’t the only place where savings can be made, but for many households the food budget has the most fat, both literally and figuratively. I don’t think we’ll ever get to the extreme frugality I’ve seen online of the $45-per-month-beans-and-rice-for-a-family-of-four budget, but just a little bit of savings per week can add up to hundreds of dollars per year. And that can make all the difference.