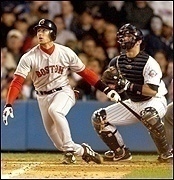 I think the Red Sox are just trying to give us collective heart attacks.

Finally, in Game 6, the bats came alive, not least from Nomar (four hits!) and David Ortiz. It was also nice to see the Yankees choking, from Matsui’s rising fastball into the stands to Contreras’ inability to get a pitch over the plate. When John Burkett gave up all those runs early on, I thought we were done. But the slamming Sox keep coming back.

It’s funny to say this, but the Sox winning tonight is more important to me than winning the World Series. I just hate the Yankees so much, it’s almost irrational. Wait, there’s no almost about it; it’s completely irrational. It’s not the men in uniform or fans I hate. It’s the idea of the Yankees, the very concept. From their stupid pinstripes to their celebrity fans who don’t know a base hit from a foul ball to their 27 World Championships, I just hate them.

And on a sad note, my condolences to Cubs fans. I was rooting for them. I really wanted them to make it past the Marlins (a team that lost a game to the Red Sox this year by more than 2 dozen runs!) The dream World Series won’t happen this year.

Now back to the present. Tonight is the best matchup you can imagine: Clemens versus Martinez in the re-match of the Clash of the Titans. What will happen to Karim Garcia when the first inside fastball slides by him? Will Don Zimmer stay in the dugout? Will Roger retaliate just a little? And most importantly, will the Sox bats stay hot? Stay tuned.

Oh by the way, Father Murphy, if you’re reading this, I won’t be able to make it to the parish council meeting tonight. I’m feeling a slight cough coming on.