He fulfilled his vocation as a lay Christian in many associative and political involvements in a society in ferment, a society which was indifferent and sometimes even hostile to the Church. In this spirit, Pier Giorgio succeeded in giving new impulse to various Catholic movements, which he enthusiastically joined, but especially to Catholic Action, as well as Federation of Italian Catholic University Students [FUCI], in which he found the true gymnasium of his Christian training and the right fields of his apostolate. In Catholic Action he joyfully and proudly lived his Christian vocation and strove to love Jesus and to see in him the brothers and sisters whom he met on his way or whom he actively sought in their places of suffering, marginalization and isolation, in order to help them feel the warmth of his human solidarity and the supernatural comfort of faith in Christ.

He died young, at the end of a short life, but one which was extraordinarily filled with spiritual fruits, setting out for his "true homeland and singing God's praises." 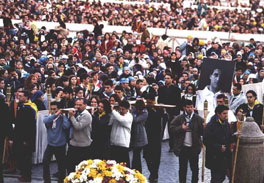 These words were spoken by Jesus Christ when he took leave of his Apostles before undergoing his Passion. I like to think of them as forming on the lips of our new Blessed himself as a persuasive invitation to live from Christ and in Christ. This invitation is still valid, it is valid today as well, especially for today's young people, valid for everyone. It is a valid invitation which Pier Giorgio Frassati has left for us. Amen.

The photos are taken from the brochure of the Associazone Pier Giorgio Frassati. Used with permission.

This site uses Akismet to reduce spam. Learn how your comment data is processed.