Despite all indicators, greenhouse gas pollution down
Share:FacebookTwitter
Politics

Despite all indicators, greenhouse gas pollution down

Was it Earth Day, government regulation, or growing industrial efficiency? Found this set of statistics from the EPA at the Acton Institute Powerblog.

Since 1970 (the year EPA was established by President Nixon), gross domestic product increased 203 percent, vehicle miles traveled increased 177 percent, energy consumption increased 49 percent, and U.S. population grew by 46 percent. During the same time period and without any help from the IPCC or UN Environmental Programmmme, total emissions of the six principal air pollutants dropped by 54 percent. I’d suggest that EPA and industry are already well on the way to doing the same thing with “greenhouse” gasses. 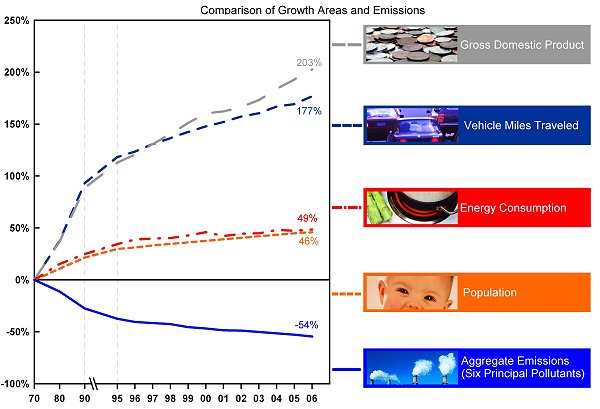 Pretty astounding. I wonder why no one on the nightly news or in the newspapers or in any of the mass media ever refers to such things. No, I don’t.

To sum up: Even as population grew, American industry grew, the amount of energy consumed grew, and the amount Americans used their cars grew, greenhouse gas emissions went down. Despite everything that environmental extremists tell us we need to do to “save the environment” from the “human-caused” catastrophe of global warming, the reality is that it’s already being done without the draconian measures they suggest are necessary.

How Do We Keep The Election of 2016 From Happening Again?