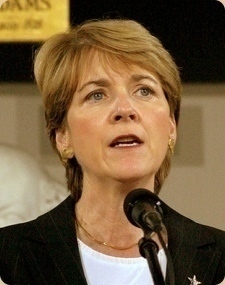 To think, Martha Coakley almost become our US Senator. The erstwhile Senate candidate and current Massachusetts attorney general wants a federal judge to declare by fiat that the federal marriage protection law is unconstitutional. And she wants him to declare it without even the pretense of a trial.

Coakley argued that regulating marital status is traditionally left to the states. She said the federal law treats married heterosexual couples and same-sex couples differently in determining eligibility for Medicaid benefits and whether the spouse of a veteran can be buried in a veterans’ cemetery.

The law forces the state “to engage in invidious discrimination against its own citizens in order to receive and retain federal funds in connection with two joint federal-state programs,” Coakley argued. “Massachusetts cannot receive or retain federal funds if it gives same-sex and different-sex spouses equal treatment …”

Except, it’s only “invidious discrimination” if you’ve decided a priori that two people of the same sex can be married. But since the duly-elected representatives of the people of the United States have declared otherwise then by definition it’s not discrimination for the federal government to deny funds intended for married couples to people who aren’t really married. In addition, because of the “full faith and credit” clause of the US Constitution, the federal government can’t make an exception for Massachusetts or any other state that has decided to ignore human nature and the realities of thousands of years of human culture and civilization on the subject of marriage. And even more, since the people of Massachusetts have been denied their right to address this topic either through their representatives or through direct referendum—instead having it forced on them by, not coincidentally, judicial fiat—Coakley’s ploy here is more of the same liberal agenda to force social engineering over the objections of the governed, by deciding for the “proles” what’s best for them.

I can’t wait until this fall when we can finally put Martha out to pasture once and for all. Hopefully we can finally find someone who will actually uphold both the Massachusetts and US Constitutions against all these attempts to undermine them and attack the foundations of our republic.

Photo via Wikimedia Commons under a Creative Commons license.