Catholics: You need to use your words
1 comment
Share:FacebookTwitter
Uncategorized

Catholics: You need to use your words 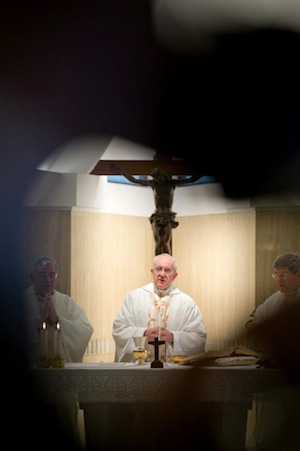 Pope Francis celebrated Mass in Rome last week for the employees of the Institute for Religious Works. Following his pattern, he didn’t focus directly on issues related to the “Vatican Bank” that have been in the news, but instead approached broader themes of Catholic discipleship. In particular, he preached, in his very direct manner, that the Church is not a babysitter.

He was saying that the Church doesn’t exist to be like a mother whose only concern is getting her fussy children to sleep so she can have some peace and quiet, instead of also being concerned with raising them into fully functioning adults who can stand on their own two feet someday to make their way in the world. And thus the Church isn’t here to make people in the pews comfortable, to give them comforting, vague words that God loves them just as they are, sing some songs, and then send them on their merry way until they show up for another hour next Sunday.

Instead, the Church is here to proclaim the kingdom of God and to send her children forth into the world, making disciples of all nations.

According to the article in L’Osservatore Romano describing the homily, “Whoever knows Jesus has the strength and the courage to proclaim him. And whoever has received baptism has the strength to walk, to go forward, to evangelize and ‘when we do this the Church becomes a mother who generates children’ capable of bring[ing] Christ to the world.”

This is the essence of the New Evangelization. It’s also the essence of the “Rebuilt” movement starting around the Church of the Nativity in Baltimore that has now become a book[1]. Catholics have to stop being consumers in the pew, always interested in what we “get” out of Mass, concerned with what the Church gives us, but also demanding that the Church stop bothering us with difficult teachings on sexuality, the culture of life, and the like. Instead, we have to become fully realized Catholics who seek out the lost, who invite them to explore a relationship with Jesus Christ, who is the source and summit of a well-lived life.

And given that somewhere around 80% of self-identified Catholics do not join us in worship on any given Sunday, we don’t even have to venture far outside our family to find people to invite.

Pope Francis concluded his homily: “Let us ask the Lord for the grace to become baptized persons who are brave and sure that the Holy Spirit who is in us, received at baptism, always moves us to proclaim Jesus Christ with our life, our testimony and even with our words”.

And I would say that for too many of us, myself included, we think that we’re witnessing enough with our life that we don’t have to use words, and if we’re honest it’s because we’d rather not use words in order to not be made uncomfortable. Sorry, but like I tell my toddler, “You need to use your words,” because, friend, the witness of your life isn’t doing job. Maybe when we’re all like St. Francis or Bl. Mother Teresa, actions will speak louder than words, but for most of us they don’t.