Brain freeze is not the worst part of this ice cream drink
5 comments
Share:FacebookTwitter
Cooking, food and drink 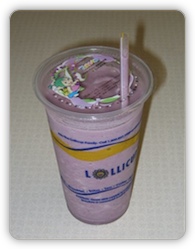 What is “America’s Unhealthiest Drink”, according to Men’s Health magazine?

At the top of their list of one dozen dastardly libations is Baskin Robbins Large Heath Bar Shake (32 oz) with 2,310 calories, 266 grams of sugar, and 108 grams of fat (64 of them saturated). That’s more calories than an adult woman is supposed to consume per day. That’s nearly twice as much fat and more than three times as much saturated fats. In one drink!

Toss in a Wendy’s Classic Triple Cheeseburger— notoriously America’s worst fast food sandwich at 940 calories with 56 grams of fat, 25 of them saturated—and you have a heart attack happy meal in one greasy sack.

Okay, of course, no one would eat both in one sitting and I’m skeptical that many of either are sold in general, but what about the sneakier foods and drinks. Vitaminwater is advertised all over, using svelte and powerful athletes as pitchmen. Yet if they lived on Vitaminwater (“It’s got vitamins right in the water!”), they would not be so svelte anymore. One 20-ounce bottle has 130 calories and 33 grams of sugar. They should just drink Coke instead.

So, while the extreme examples on lists of this type are fun to gawk at but are probably rarely consumed, they do serve the helpful task of drawing our attention to the more mundane products which don’t pack the same wallop to our health, but can be cause for concern if consumed to readily. In the end, I think we’d all be well served if we paid closer attention to the nutritional labeling.

You might want to lay off some of those Starbucks Frappuccinos when you see how much fat and calories are in them, even if they’re not in the blow-out-your-aorta category.