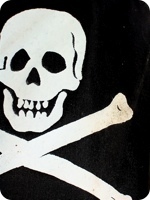 Sunday’s successful conclusion of the hostage situation off the coast of Somalia, where pirates were holding Captain Richard Philips, captain of an American freighter, is not to be dismissed. The intrepidity of the US Navy Seals who made the on-site decision to act, shooting three pirates on a moving boat from a moving ship —at night!—with one bullet for each is astounding. But even as we reflect on this success, we hear that pirates are attacking yet more vessels. Certainly it doesn’t help that for every success operation against the pirates, there are a half-dozen losses, including the payment of ransoms. Business is very good for the scum of the high seas.

So I have to wonder why the ships of the US Navy and our allies—12 ships in all—are being spread out over millions of square miles. Certainly, rooting the pirates out of their safe havens in Somalia is not an option. They blend into the populace; many of them are teenagers. You’d have to have a scorched earth policy.

But why not take a lesson from history and do what the great navies of the 18th and 19th century did? Instead of protecting the water and racing to the aid of lone ships, why don’t the cooperating navies form up convoys of ships in the Gulf of Aden and the Red Sea and the western Indian Ocean and protect the convoys. Then, for good measure, assign US Marine detachments to US-flagged vessels and encourage non-US vessels to hire private soldiers to protect the ships from boarding.

I can’t be the only person to think of this. But I haven’t see anyone explain why they don’t do this.

As for the baloney about where to try the pirates, as if they’re going to bring them here to the US for trial in American courts, let’s not forget how we used to deal with them: efficiently and effectively in military courts on the warships that caught them.

Life in the “Danger Zone”

Islamic State, Daesh or Isis: the dilemma of naming the militants