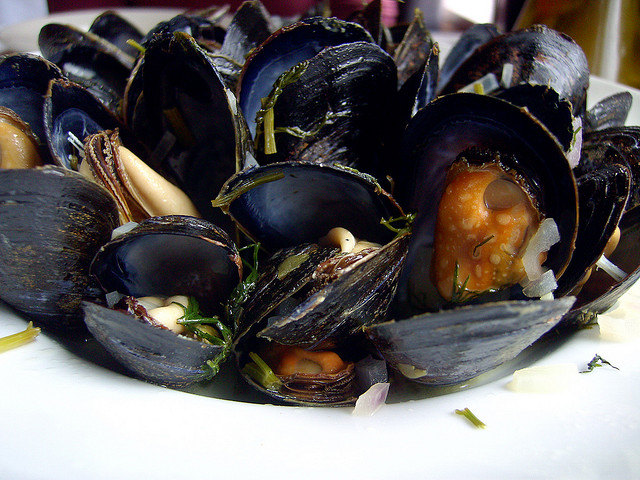 On Saturday we went to the penultimate week of our local farmer’s market and I picked up some mussels from the fishmonger who gives the kids lollipops every week.

When we got home I turned to my favored preparation for the shellfish that come from the cold Atlantic waters of Prince Edward Island: Mussels in tomato, garlic, and wine broth. There were so many leftover today that I was able to make a nice linguine in mussels sauce for lunch.

Place a Dutch oven or other heavy-bottomed pot over medium heat and add the oil. When hot and there are just a few wisps of smoke, add the onions, garlic, red pepper flakes, and salt. Sauté for 5 minutes until the onion is just translucent and add the tomatoes, fresh and canned, and black pepper. Cook for 4 minutes until the tomatoes start to break down and add the wine. Bring to a boil. Add the mussels, cover and steam for 5 to 7 minutes or until most of the mussels have opened. (Never eat mussels or clams that don’t open after cooking; they were dead before the went in the pot and could sicken you.) Stir in the butter. Serve with baguettes to sop up the broth.

After you finish the mussels and if there are any left over (which you can guarantee by doubling the recipe above), take the mussel meats out of the shells and put them in the broth before storing them in the refrigerator. The next day, put the mussels and broth in a large straight-sided fry pan and set over medium heat. You want to bring them to a simmer, heating the mussels without cooking them any further and turning them into elastic bands.

Set a large pot of water over high heat and when boiling add a couple large tablespoons of salt before putting in the dry pasta–linguine, spaghetti, or fettucine will all do. Cook until al dente or at least one minute less than the directions specify. When the broth has reduced a little or about one minute before the pasta comes off the heat, add in a tablespoon of cold butter and stir until it melts and incorporates. Add the cooked pasta to the sauce and stir until it’s all melty and velvety together.

And there you have two very nice meals. By the way, the RoTel tomatoes add a nice spicy punch, but if you can’t find them in your grocery store, just add a second diced tomato or even a small can of diced tomatoes.

Also, if it comes up at your dinner table like it did at ours: Pink or orange mussels are female while white mussels are male.