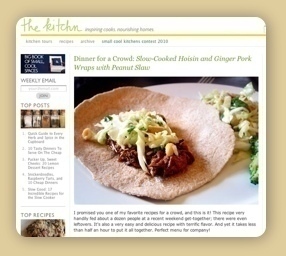 [lead dropcap="yes"]Today I decided to make this recipe for slow cooker Chinese-style pulled pork that I saw at the Kitchn blog. I was intrigued at how easy it seemed: 4 ingredients, pop ‘em in the cooker, and 10 hours later you eat. So I picked up a jar of hoisin sauce, some garlic, ginger, and a 3 lb. bone-in pork butt and we tried it out today.[/lead]

We didn’t have the ingredients for the Crunchy Peanut Slaw that they paired it with, so we made Melanie’s Chinese-style broccoli slaw as well as a new recipe we’ve fallen in love with, Szechuan Eggplant, from “The Key to Chinese Cooking,” by Irene Kuo. (I’ve had this cookbook for years and it’s got great authentic recipes that you can make with ingredients you can find online easily or in your supermarket. Sadly, it’s out of print, but you can buy used copies at Amazon for $120!! People love this cookbook.) We pump it up a little by adding in some zucchini with the eggplant.

In the end, the slaw and eggplant were as good as they always are, but the pulled pork was somewhat disappointing. With only 4 ingredients, the whole recipe succeeds or fails depending on the quality of any one of them. In this case, I think the weak link is the hoisin sauce. The store-bought hoisin left the pork tasting flat and one-dimensional. There was an option for a homemade hoisin, but looking at the recipe I don’t know if that would be be any better. A note on the hoisin recipe speculates that the black bean paste called for in the ingredients is probably the same as the black beans found in Mexican cooking. That would be, No. Black bean paste is made from soybeans.

Meanwhile, Irene Kuo has a recipe for Hoisin-sauced Pork that has similar ingredients, but a few extras to give it depth, and a slightly different method. I would guess that this is the inspiration for the slow cooker pork. Perhaps if we brought the slow-cooker recipe back closer to the authentic version, we could have the easy slow-cooking method combined with the better taste of authenticity.

In the end, though, I think Melanie was most put off by the fact that the pork looked like barbecue and tasted nothing like it. As a native Texan she’s just accustomed to associating what she saw with what she’s used to. So I may buy another pork butt and throw it in the slow-cooker—because it really did fall right off the bone at the end—but replace the Asian influence with good old-fashioned Texas barbecue sauce. After all, the method worked, even if the flavor didn’t.