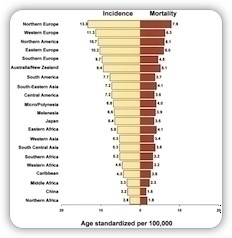 As we were driving to and from the farmer’s market Saturday morning, all of the intersections in Salem were clogged with pink-shirted peddlers raising money for the Susan G. Komen Foundation. Melanie and I agreed that until the group —and other groups supporting research—was truly open to looking at all the possible sources of breast cancer, such as birth control pills, we weren't interested in giving them our money.

I’m not saying that I’m convinced that the Pill is the source of breast cancer. It’s much too complex for a layman like me to draw a conclusion like that. But it’s ideology, not science, that prevents organizations like Komen and the American Cancer Society and others from even being open to the possibility.

But even a cursory glance at the scientific data shows that something is up. Consider the Global Cancer Statistics, 2002 in “CA: A Cancer Journal for Clinicians”, published by the same American Cancer Society. Look at the incidence of breast cancer across the various regions of the world. North America is number one with 99.5 per 100,000 women, while Middle Africa is lowest. The most developed countries are all grouped at the top of the chart, while the least developed are at the bottom. The same goes for ovarian cancer, with almost the exact same chart. Why?

There could be many factors, including diet, exposure to chemicals prevalent in First World consumer goods, etc. But consider that 22.9 percent of all women in the US 15-44 years old use a form of chemical contraception, (PDF from the Centers for Disease Control’s National Survey of Family Growth; see Table 56, “Number of women 15–44 years of age and percent distribution by current contraceptive status and method, according to age at interview: United States, 2002”). Another 16.7 percent seek surgical sterilization. In what ways do these artificial frustrations of the body’s natural systems contribute to cancer in a part of the body intimately associated with the reproductive process?

(Incidentally, I’ve found a number of online sources that claim 80 to 90 percent of women 15-44 use contraception, which is only true if you include all forms of regulating births, even natural family planning! This “90-percent” is used to push young women into accepting prescriptions for the Pill, convincing them that “everyone’s doing it” and that it’s completely normal and safe. I’ve known young, faithful Catholic women who were convinced by their doctors to take the Pill to regulate and suppress their periods. Anything to get them on the Pill.)

The fact is that while liberals have blasted conservatives for introducing ideology into vital health education with regard to abstinence-only sex education, it is liberals who have put ideology ahead of science in cancer prevention and research. God forbid that one should suggest that perhaps unfettered sexual license does have consequences. For too many of them the Pill represents freedom from male oppression, freedom to emulate the worst impulses of the male psyche. Well, that “freedom” comes with a price.

Catholics in the Political SphereSexuality