Who makes the Communion bread?
3 comments
Share:FacebookTwitter
Faith and Liturgy

Who makes the Communion bread? 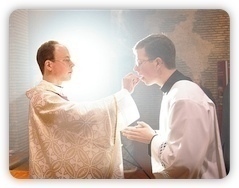 Michael Paulson, religion reporter at the Boston Globe provides a video that gives an inside look at the Rhode Island company that makes most of the Communion wafers in the country. It accompanies an article on the same company that was in the paper a few days ago. While they supply Protestant denominations who hold communion services too, the majority of their business is from the Catholic Church in the US and they hold a near-monopoly.

According to the company representative in the video, they make about 25 million altar breads per week and because they have such a large proportion of the market, their data on Mass attendance is very accurate. He said they noticed a downturn of about 15% when the scandals hit in 2002, and that they also saw a spike in attendance for about 6 months after 9/11. He also said that attendance goes up during a bad economy.

Another interesting aspect is the care they take in producing the breads since they know that they are destined for the most sacred purpose. As the CEO says in the video, they just make the bread-and-water baked good; it’s the priest and God who transform it. But they do take pains to ensure quality control such as ensuring that the edges are crumb-less, so no pieces fall to the ground during Holy Communion and they market them as untouched by human hands throughout the production process.

Incidentally, don’t read the comments on t he story unless you want to see the same old abuse and misinformation you see everywhere else. I have a new general rule of Internet use, which is that 99 percent of all comments are trivial and/or offensive and/or juvenile and should not be read.