Who is Sarah Palin, really? 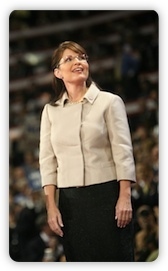 Writing in Commentary on “The Meaning of Sarah Palin”, Yuval Levin says that before her elevation to the national stage she wasn’t the “female Reagan” the Right made her out to be nor the “latter-day Jerry Falwell with a little bit of Tammy Faye” the Left made her out to be:

She had been serving as the popular chief executive of a geographically vast, sparsely populated, and economically vital state. She held conventionally conservative Republican views—pro-gun, anti-tax, and pro-life. She had risen to prominence by taking on Alaska’s corrupt and profligate Republican establishment. In running for and winning the governorship in 2006, she had promised (and had begun to deliver) reforms of the state’s relationship with Washington and with the oil companies that dominated its economy.

[…] She was a good-government reformer with social conservative leanings, not the other way around.

[…] Palin was assigned every view and position the Left considered unenlightened, and the response to her brought into the light all manner of implicit liberal assumptions about cultural conservatives. We were told that Palin was opposed to contraception, advocated teaching creationism in schools, and was inclined to ban books she disagreed with. She was described as a religious zealot, an anti-abortion extremist, a blind champion of abstinence-only sex education. She was said to have sought to make rape victims pay for their own medical exams, to have Alaska secede from the Union, and to get Pat Buchanan elected President. She was reported to believe that the Iraq war was mandated by God, that the end-times prophesied in the Book of Revelation were nearing and only Alaska would survive, and that global warming was purely a myth. None of this was true.

We know why the Left, especially the mainstream media, including “Saturday Night Live”, created the image of Palin that they did. So why did conservatives create their image? I would say that it’s because the conservative wing of the Republican party—Reagan Republicans—have been so starved of candidates that even hinted at being as conservative as Palin appeared to be and who had such a compelling personal story and came out of nowhere and was so gosh-darn approachable that she became the candidate who embodied all our hopes and dreams. For the first time in 20 years we finally had a member of the presidential ticket who believed and promoted all those conservative positions we wanted. She wasn’t just a social conservative or a fiscal conservative or a small-government conservative or a supply-side economics conservative, but—in our current assessment—she was all three.

And so Sarah Palin outshone the top of the ticket, John McCain, the unpardonable sin of the running mate. The question remains whether a Sarah Palin who must endure the intra-party slings and arrows—not to mention the continuing misrepresentations and attacks of a hostile media establishment— can fare as well in a national primary campaign. Will we see the same Sarah Palin in 2011? More to the point, will we see her in 2012?