What’s the real reason sales of picture books are languishing? 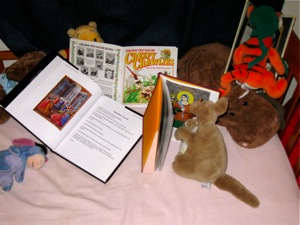 Parents have begun pressing their kindergartners and first graders to leave the picture book behind and move on to more text-heavy chapter books. Publishers cite pressures from parents who are mindful of increasingly rigorous standardized testing in schools.

But is that really the reason? Undoubtedly, it’s part of the cause, but it could also include the fact that so many of the new picture books that the book industry is dumping on the shelves at an alarming rate are just dreck and drivel. One reason to believe this may be the case is that sales of classic books continue to be strong.

Classic books like “Goodnight Moon” and the “Eloise” series still sell steadily, alongside more modern popular titles like the “Fancy Nancy” books and “The Three Little Dassies” by Jan Brett, but even some best-selling authors are feeling the pinch. Jon Scieszka, who wrote “Robot Zot,” said his royalty checks had been shrinking, especially in the last year.

In other words, classic books that have stood the test of time and new books that have proven to be good are still selling well. But new books that are a flash in the pan or are just plain bad aren’t selling. Frankly, I think it’s a reflection of the whole book industry: People are starting to be choosy about the books they spend their money and fewer dollars are being spent on poorly written, edited, and produced titles that have filled the seasonal catalogs of publishers for years. The book industry, like the music industry, has gotten by for decades vomiting forth formulaic products hewing to the latest fads and sopping up disposable cash. But in the midst of the Great Recession and an era of easy access to competitive content online, people are less willing to spend money on dreck.

When I look at the children’s books that are out there—much of it the equivalent of junk food, some of it actively harmful to their development—I understand why parents are getting fed up. How many Winnie-the-Pooh equivalent books are produced in a generation? How many Seuss-quality writers have there ever been? Jan Brett

by Loren Long. I’m having a hard thinking of another new picture book that stands out.

As usual, the old media producers of content miss the change in those who purchase and use their content. Music companies blame piracy for declining sales of music rather than their ongoing attempts to make us buy the same classic music catalog over and over again in every new format and then push the likes of Kesha and her doppelgängers at us. Likewise, Hollywood which rarely stumbles upon unique gems like “Lost” and then decides that if we like one “Lost”, we’ll love a dozen poorly made lookalikes. And then if we want to watch the TV shows and movies on something other than the decades-old technology they allow, they accuse us of piracy. And then also blame declining profits on piracy and anything else other than their own shortsightedness.

And thus with the book publishers. I don’t doubt there are plenty of parents pushing their kids into chapter books as part of their ongoing obsession with measuring their own worth by their children’s material success in life, but I won’t overlook the nagging suspicion that much of the blame can be found by looking in their own mirrors.