The coolest Fourth ever 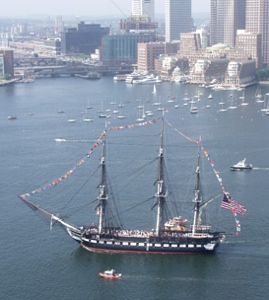 Update: I’ve now put up a post with photos, video, and my impressions of this awesome day.

I’m going to have the coolest Independence Day ever and I think it will be hard for anyone to top. That’s because I will be spending my Fourth aboard the world’s oldest commissioned warship, the USS Constitution, during it’s annual turnaround cruise in Boston Harbor.

My dad knows a former commanding officer of the ship known as “Old Ironsides” and some time ago promised me that he would ask his friend about getting us onboard for the cruise. I’d forgotten all about it until today when he called me to tell me not to make any plans for the Fourth.

On the ship’s bicentennial, when the Navy sailed it from Boston to Marblehead, I got up at some ungodly hour before dawn to photograph it from the shore in that early morning light.

So yeah, this is big. Very big.

I plan to take a lot of photos and video. I tried to convince Melanie that I need a better camera to take said photos but she looked at me funny and said I didn’t. She just doesn’t understand. Sigh.