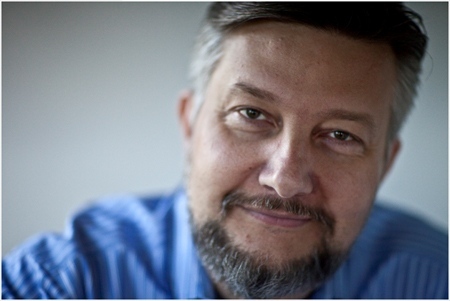 Andreas Widmer has a compelling story. He started as a young Swiss Guard assigned to protect Pope John Paul II. Later, he met with huge success in business, followed by setbacks, and then still later with a resurgence of success coupled with a delving into his faith.

I met Andreas when he was on our radio show The Good Catholic Life as a guest several times and also in a social setting at pool parties at my brother’s house. He’s a great guy, very friendly and open, a good dad and husband. He also has great stories about being a Swiss Guard, what it was like to be around a living saint like Bl. John Paul all the time, and then helping create some of very big names in technology.

A couple of years ago he wrote the book, The Pope & The CEO: John Paul II’s Leadership Lessons to a Young Swiss Guard

, which detailed his own quest to show that business success and Christian virtue are not opposed and that in fact, virtues and leadership founded on Christ’s example will lead to greater success. And just recently he and his family moved to Washington, DC, where he is director of entrepreneurship programs at Catholic University of America.

He was interviewed by the Cardinal Newman Society’s Catholic Education Daily about his background and what he’s learned about the intersection of business and Catholic ethics.

Widmer discovered many “parallels” between theology and business. For example, he pointed out how “we are saved as a Church,” but there is also the “importance of personal virtue.”

In a similar fashion, he continued, “The [economic] system that we are a part of is a good system, and it works. But if we don’t have business that can be sustained by personal virtue and morality, then the whole system cannot function.”

In John Paul II’s “three leg stool” for a prosperous society, there is a participatory form of government, a free market based on the rule of law, and a public moral culture, Widmer explained.

I think I would like to hear more from Andreas in this area, especially in relation to what we’ve heard from Pope Francis. There’s been so much misinformation and doubt thrown around the Holy Father’s statements, that I’d like to hear from someone who’s studied this from a Catholic perspective. I’ll have to see if Andreas is available to join us on the air.