Sotomayor attacked from the abortion left 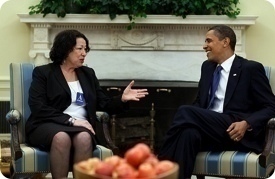 President Obama has chosen his Supreme Court nominee, Sonia Sotomayor, to replace David Souter. As expected she’s very liberal and she’s not a pro-lifer by any means. But then we couldn’t have expected anything else from the most pro-abortion president ever, and anyway she’s replacing another liberal member of the court and so the conservative-liberal balance remains.

So, it’s interesting to see the abortion-related criticism against Sotomayor coming from’pro-abortion groups. It’s not that she’s too pro-life, there’s certainly no evidence of that. No, it’s that she’s not quite rabidly pro-abortion enough.

In a 2002 case, she wrote an opinion upholding the Bush administration policy of withholding aid from international groups that provide or promote abortion services overseas.

“The Supreme Court has made clear that the government is free to favor the anti-abortion position over the pro-choice position,” she wrote, “and can do so with public funds.”

In a 2004 case, she largely sided with some anti-abortion protesters who wanted to sue some police officers for allegedly violating their constitutional rights by using excessive force to break up demonstrations at an abortion clinic. Judge Sotomayor said the protesters deserved a day in court.

In a 2007 case, she strongly criticized colleagues on the court who said that only women, and not their husbands, could seek asylum based on China’s abortion policy. “The termination of a wanted pregnancy under a coercive population control program can only be devastating to any couple, akin, no doubt, to the killing of a child,” she wrote, also taking note of “the unique biological nature of pregnancy and special reverence every civilization has accorded to child-rearing and parenthood in marriage.”

And in a 2008 case, she wrote an opinion vacating a deportation order for a woman who had worked in an abortion clinic in China. Although Judge Sotomayor’s decision turned on a technicality, her opinion described in detail the woman’s account of how she would be persecuted in China because she had once permitted the escape of a woman who was seven months pregnant and scheduled for a forced abortion. In China, to allow such an escape was a crime, the woman said.

In my quick read of these summaries I see only a judge abiding by the law, who doesn’t undermine it just because she might not like the pro-lifers’ position. Did these radical abortion groups want her to rule against the pro-lifers who thought police used excessive force, to deny them their day in court simply because she doesn’t like their politics? I suppose it’s some small— very small—measure of comfort that she’s not one of those judges who rules on a whim. (What does it say for our society that we have such low expectations for our jurists?) Was she supposed to deport the Chinese woman to a country that would subject her to a forced abortion?

I say this reveals a lot about those who support so-called abortion rights in this country, that these groups don’t really care about women having a choice, but that they view pregnancy and childbirth as evil by default.

Meanwhile, the White House, instead of telling the bloodthirsty mob of Moloch-worshippers to back off, has tried to placate them with assurances of Sotomayor’s reliable vote on any abortion-related case that would come before the Court.

But White House officials appeared eager to send a message that abortion rights groups do not need to worry about how she might rule in a challenge to Roe v. Wade.

“He did not specifically ask, as we’ve stated for the past several days,” Gibbs said. “But as I just said, I think he feels — I know he feels — comfortable, generally, with her interpretation of the Constitution being similar to that of his.”

Win one for the blood-red horde.