[lead dropcap=”yes”]In late November, I sent a support request to Ring.com with a question about a couple of their products I own.1 Their site claims that they are committed to respond to every request within 24 hours. Instead, I waited four days with no response and then sent another request. Again, nothing, and I didn’t make another attempt.[/lead]

Two weeks after that, I finally got a response. They apologized for failing to respond, were willing to help now, and offered to send me, as a sign of gratitude for my (assumed) patience and understanding, a complimentary “Ring Solar Sign”, which is a solar-powered version of those little alarm company signs you see on lawns as a deterrent to would-be burglars. Emphasis on “little”.

Now, I don’t want to seem ungrateful, but I don’t think the proper response to a customer service failure is to offer to send me something to stick on my lawn to advertise your service. I wasn’t looking for any handouts at all, just help with my problem, but am I wrong that this feels a little tone-deaf?

Anyway, not wanting to be a roadblock to getting my problem solved, I said, thanks, and then laid out my problem, saying I figured out one part, but still had trouble with the other. Their response said that the complimentary sign was on its way and we addressed my troubles.

Fast forward a couple of weeks to today when I received a package in the mail, containing the box you see above. I was curious that they would need such a large box for a little sign. So I opened it up and found this monstrosity. 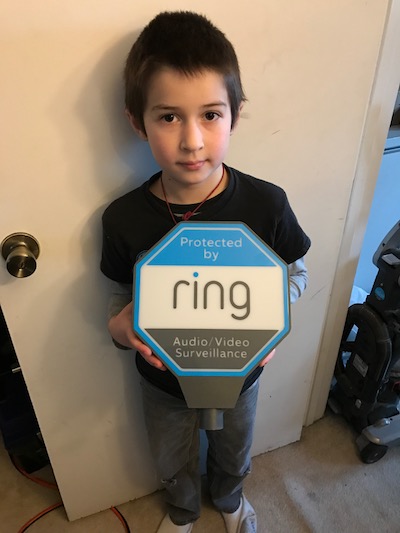 That thing is almost a foot wide! And it will be lit up at night! I thought it was going to be a little sign and they send me a billboard. I suppose if I was living in some McMansion with a long driveway, you might need something that big to see it from the street, but I live in a little ranch with a postage—stamp driveway. That thing could keep my across-the-street neighbor awake at night.

So, thanks but no thanks, Ring. I think I’ll go stealth on my security and stick to the doorbells and video cameras.