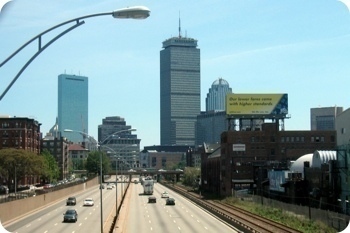 Once again, our liberal solons and their coatholders are surprised by human nature and economic reality. For the second year in a row, the Massachusetts Turnpike has seen a drop in the number of users, only the second time in its history that we’ve seen the double dip. That’s resulted in a decline in revenue and a scramble to prop up the bloated budget for another patronage-laden state agency.

Of course, the recession has to take some blame. When 10 percent of residents are unemployed, that’s going to affect the numbers of people on the road. Although many people I know who regularly drive state roads say that they’re just as crowded and busy as they've ever been. But that’s just anecdotal.

“The lower numbers are primarily a function of the economic climate. We are in the worst economic times since the Great Depression, and fewer drivers are using our roads,” said Adam Hurtubise, spokesman for the state Department of Transportation. “Fewer vehicles on the turnpike means that the department receives less toll revenue.”“

But unemployment doesn’t tell the whole story. In fact, two years ago, we were told that because of falling revenues and increased costs at the same Mass. Turnpike Authority, they would have to raise toll rates yet again. In 2001, toll rates were doubled to $1 for cars on most roads and to $3 in the harbor tunnels. Two years later, right before the big drop in ridership, those tolls were raised again to $1.75 and the harbor tunnels have essentially more than doubled because they are now $3.50 and for the first time are assessed going in and out of Boston. A trip to the airport now costs $7.00 in 2009 compared to $1.50 in 2000. And some politicians are talking about raising them again!

The fact is that the rising tolls have led to people avoiding the Turnpike for their daily commute and driving about town. I know that when I was still commuting from Salem to Brighton and I heard the first rumblings of plans to raise tolls, I researched alternate routes that would avoid the Turnpike. And while I knew I would be getting more company on those roads, the slightly increased time would be worth the hundreds of dollars saved per year by avoiding the tolls. Thankfully my daily drive from Holbrook to Braintree is on city streets.

In 2006, the conservative, Massachusetts-based Pioneer Institute released a report of their analysis of the Massachusetts Turnpike Authority (PDF), its effect on the economy of Massachusetts, and its future. Their unsurprising conclusion is that the collection of tolls is a net drain on the state economy and that the toll-collection system actually saps money from road maintenance, i.e. that there would be more money to maintain the roads—the putative reason for the agency—if there were no tolls.

The Turnpike tolls are another sap on the banks accounts of the average citizen, who is being drained from a thousand taxes, big and small. So now the taxpayer is fighting back in the only way he knows how: avoiding the taxable behavior.

As usual, this confounds the liberal politician. As I’ve noted before, liberals seem to think that you can raise taxes on people again and again and they’ll just keep paying. But basic economic knowledge tells us that people act in their own best interest. And thus it’s a never-ending cycle of raising taxes and watching revenues fall. You’d think they’d get it after a while.

Incidentally, the Massachusetts Turnpike Authority no longer exists as a separate entity, but has been folded into the state transportation department, but it continues on in spirit. Not much has changed as far as the pork and patronage are concerned. As usual, it’s a reform in name only, intended to mollify critics and voters.