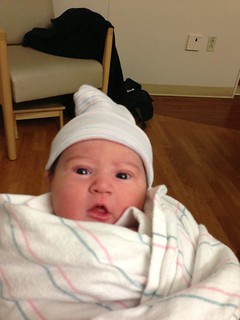 Lucia shares a birthday with my favorite author, J.R.R. Tolkien, born this day in 1892, and the famed pianist/humorist Victor Borge. Her feast day is the Holy Name of Jesus and St. Genevieve.

This was a scheduled c-section, since Melanie has 4 caesarean sections already and the option for natural birth is long in the past. However, the schedule was not exactly the schedule we thought. Lucia was supposed to be born on 12/31, but Melanie had caught a cold over Christmas and then a stomach bug and was in such bad shape for her pre-op appointment last Sunday that they re-scheduled her. But as they say all things work out in the end for good, since not only does Lucia get this auspicious day for her birthday, Melanie also managed to get her favorite OB, Dr. Shaw, for the surgery. 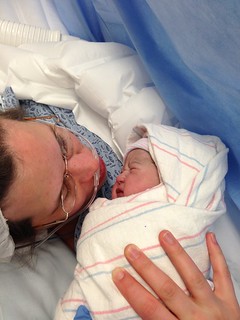 Dr. Shaw does not have a private practice, but only does hospital work. She takes unexpected c-sections mainly and she delivered Anthony, who came earlier than his scheduled date. She has an amazing bedside manner and is acknowledged as one of the best OB surgeons in the area. (The nursing staff both times gushed over Dr. Shaw, which tells you something.) As it turned out, Melanie said this was the easiest of her deliveries, with the least anxiety and the least pain, during and after. Let’s hope this is a sign of things to come as recovery always seems to take forever for her.

As we were preparing to head to the hospital this morning, I took a moment to review how I captured the moment for the other four births. Each one has been chronicled in one way or another online. 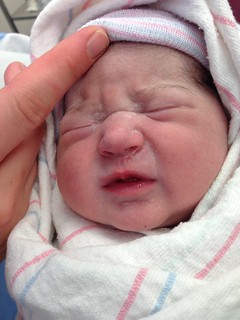 For instance, with Isabella in May 2006, I took a photo in the recovery room and posted it online later that evening when I was back home on my iMac. The next morning, I wrote a blog post with all the details of her birth. Since that was before the ascendancy of Twitter and Facebook (remember those days?), that was the extent of it.

By the time Sophia was born in March 2008, Twitter had come along and so after a brief post to the blog from my oh-so-barely-adequate Blackberry, I tweeted some updates, but also had a series of blog posts over the next few days as we tried to get her to come out naturally before having to resort to c-section. (A harbinger of stubbornness to come.) Happily, the hospital now had Wifi and so we had our laptops in the room during labor and afterward. Melanie even blogged during labor. 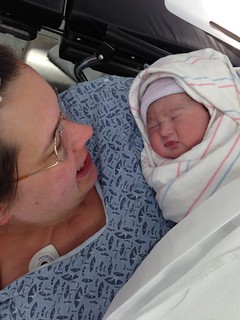 When Ben came around in July 2009, the social media revolution was in full swing and so in addition to updates on Twitter, Facebook, and Flickr, I had a nice blog entry introducing my son. Interestingly, Benedict got the most media exposure as Michael Paulson, who was then covering the religion beat for the Boston Globe, featured our naming of Benedict after Pope Benedict, in his blog at the Globe’s website. (The comments were a mix of nice remarks and the usual troll-droppings you find in newspaper comboxes.)

And then there was Anthony in February 2011. By the time of his birth, live tweeting was old hat. I now had an iPhone that I could take pictures with, post online, write tweets and status updates and all the rest. Interestingly, I primarily used the web services Posterous at the time to simultaneously post to my blog, Twitter, and Facebook. Since then the service pivoted to providing a different kind of experience and then was acquired by Twitter. 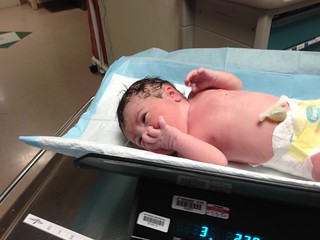 So now we have Lucia in January 2013. I was able to use the Buffer web service as an able replacement for Posterous that can post to Facebook, Twitter, and App.net, all at the same time. I also used the new Flickr app on my iPhone to post photos to Twitter and Facebook. I took a short video of Lucia in the OR to send via iMessage to my mother-in-law so she could show her to the other kids at home. Interestingly, for the birthing center staff this raised not a single eyebrow. Whereas for the first three kids at least, the presence of computers and smartphones was occasion for at least a little surprise, for the last two it is clear this has become commonplace. 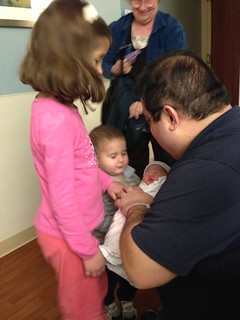 I had hoped I could up my game this time and live videostream the delivery, but Melanie was dead set against it. (Kidding! Although the nurse did say that they sometimes Skype the delivery so that servicemen overseas can take part.)

So now I am home with the kids in bed while my mother-in-law stays with Melanie and Lucia in the hospital. And all is right with the world. What a great beginning to 2013. I can only hope it stays up like this.