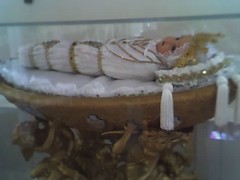 Back at the beginning of September, I wrote about my parish’s special Mass for the Feast of the Nativity of Mary which Cardinal Sean O’Malley celebrated. It was a big occasion because we were re-dedicating the newly restored Creche of Santa Maria Bambina, Mary the Infant. The creche had previously been in the now-closed St. Mary’s Italian church and was brought over to our parish and lovingly restored.

I was asked for some photos of the creche, which I promised. Unfortunately, it hadn’t been in our church until now because they were making a special case for it. Now that it’s been made and placed in the church (next to the baptismal font, appropriately enough), here are some photos.

The one above is a close up of the statue. This one is a wider view of the whole creche. The creche, from what I understand, is a copy of one that is in a church in Rome and that this one was specially commissioned and then blessed by Pope Benedict XV at the beginning of the 20th century before being brought to Salem.

It’s very nice to have such tangible remembrances of both the history of the Catholic community in Salem as well as of Catholic culture.