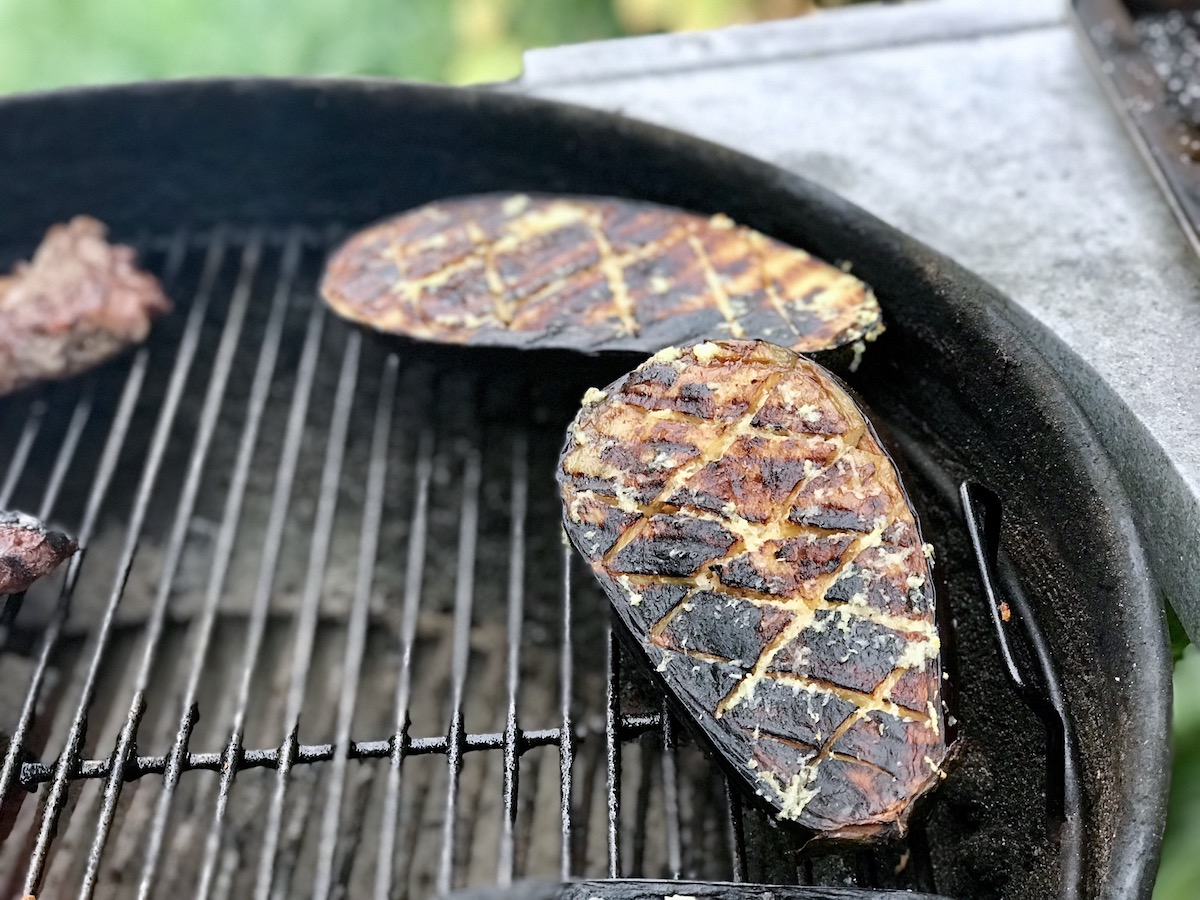 [lead dropcap="yes"]This recipe combines two different recipes from Milk Street Kitchen that have Israeli and Iranian origins. The first is Grilled Eggplant with Sesame and Herbs and the second is Broiled Eggplant with Chilies and Cilantro. The latter includes as one of the ingredients a sweet-and-sour mint dressing called Sekanjabin.[/lead]

What I have done is taken the cooking technique of the grilled eggplant and combined it with the flavors of the broiled. What results is a wonderfully creamy, spicy and sweet vegetable that's good on its own, but is also very good spread on some crusty bread. We've now made it three times in the past month and we can't get enough of it.

So here’s what you do.

Start a charcoal fire in your grill and bank the coals on one side to create a two-zone cooking space, or turn on half the burners on your propane grill or set your oven rack so that eggplants on a baking sheet are six inches from the broiler element and pre-heat the broiler.

Halve the eggplants lengthwise from stem to bottom and score the surface in a diagonal crosshatch pattern, being careful not to cut through the skin. 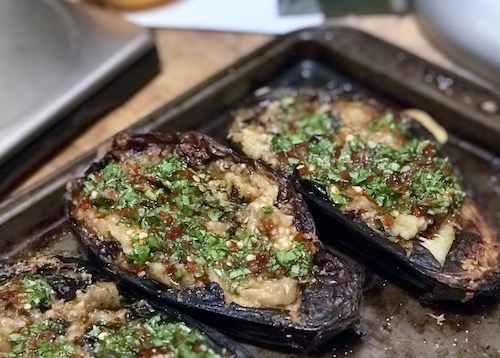 Take 1/4 cup of olive oil and brush the four surfaces generously until all the oil is absorbed. Eggplant is very absorbent and it should take it all up. Season with salt and pepper. Meanwhile, put the grated garlic in the remaining 1/4 cup of oil and set aside.

Place the eggplant halves cut side down over the fire on the grill for 5 to 10 minutes until they are deeply browned, then flip over onto the cooler side of the grill. Brush in the garlic-oil mixture, being sure to get the garlic deep into the scored crevices. Cover the grill and cook for 30-40 minutes more or until a skewer pushes through the eggplant horizontally without resistance. Remove from the fire.

(If broiling, after the tops are golden brown, then reduce the oven to 475° to finish cooking.)

In a spacious bowl, combine the cilantro, chili-garlic sauce, and sweet-and-sour dressing. Using a fork and a spoon, gently scrape and mash the eggplant flesh, either leaving it in the skin or scooping into the bowl. If leaving in the skin, divide the cilantro mix among the eggplant halves and mix together. Otherwise, mix the mashed eggplant with the cilantro-chile mixture and serve in a bowl. 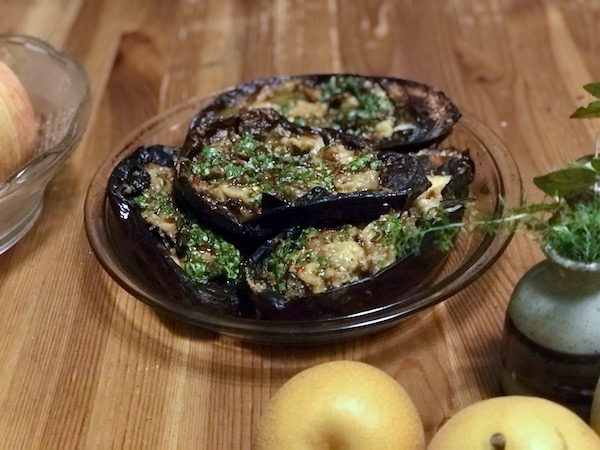 Combine honey, salt, and 1/2 cup cider vinegar in a small saucepan and bring to a simmer. Reduce for about 7 minutes, until it’s about 1/2 cup.

Remove from the heat and add the mint, mixing to combine well. After it has cooled, strain into a bowl. add the remaining cider vinegar and stir. Refrigerate for up to 1 month.