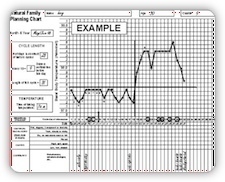 More and more Protestants are turning to natural family planning not just for medical reasons, but also for spiritual reasons. While some are using NFP as a form of contraception, as opposed to the Catholic sense of the openness to life, most of the Protestants interviewed for the article in the Austin American-Statesman say they’ve rejected artificial contraception because they believe it doesn’t show complete trust in God and they’d rather work with the way God created women’s fertility, rather than impose upon it.

It is gratifying to see that the reporter did her homework and got most of the Catholic teaching right, and did at least as well as any other secular story I’ve read. Not perfect, but not bad either.

Natural family planning is frequently dismissed by Protestants as an outmoded Catholic practice that most Catholics don’t even follow anymore. But 40 years after Pope Paul VI released Humanae Vitae, the document outlining the church’s position on marital sex and procreation, the method and the theology behind it are earning respect among some young Protestants, according to Christian scholars.

The 1968 papal encyclical explains the church’s interpretation of the moral and natural laws, which includes a prohibition against artificial contraception but allows couples who want to plan their children to “take advantage of the natural cycles immanent in the reproductive system and engage in marital intercourse … during those times that are infertile.”

This approach, for years known as the rhythm method because it relied on a calendar to track a woman’s ovulation based on past cycles, underwent improvements over the years, becoming a more reliable system known as natural family planning.

In seeking balance in the story, the reporter also found a Protestant couple who had tried NFP, but then gave up on it, although I found the reasoning to be curious.

Though the book said that natural family planning only involved a short period of abstinence, the couple wrote that they didn’t know that during breast-feeding cycles it often involves month-long periods of abstinence and what they called intense stress. “During such times (as well as during menopause and stressful life seasons), strict NFP reaches a point where it is more harmful for a marriage than good,” they wrote.

I was baffled by the reference to a month-long periods of abstinence during breastfeeding, especially since we know that if your child is exclusively nursing, the mom’s fertility does not return for some months. Yes, we learned that breastfeeding does throw off the usual charting method, but Melanie took a supplemental class that taught a way to compensate. (Frankly, we just wing it anyway, which is probably why Melanie gets pregnant almost as soon as fertility returns.)

Of course, Melanie points out to me that the Archdiocese of Boston’s Family Life Office actually created its own curriculum for teaching NFP and that it’s exceptionally complete, whereas much of what’s out there is not as good. I suppose that there might be others teaching NFP who won’t go into the more complex charting during breastfeeding and just cop out with a blanket abstention.