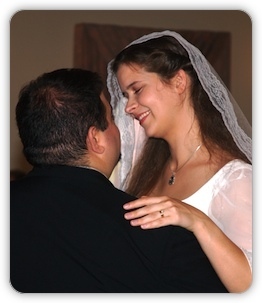 A friend of my sister-in-law dropped me an email the other day. She’s getting married and wanted some advice. She knows that Melanie and I eschewed the traditional DJ for our reception and instead went with a series of playlists on my iPod hooked up to a speaker system.

Yes, horrifying and terribly gauche, I know, but we were trying to be economical and neither us liked the idea of a disc jockey imposing his personality on our reception. It went mostly well, after we decided not to use the expensive performance monitors I borrowed from a friend and just ran it through the hall’s stereo system. (Unfortunately the expensive speaker system made horrible feedback and we couldn’t figure out why.)

So my s-i-l’s friend said she didn’t think her fiancé’s taste in music was right for a reception and, based on what she’d heard, thought mine might be a better fit. I’m flattered, of course, and so I told her I’d share the playlist from our wedding reception. I should mention that these songs come from both me and Melanie. Can you guess which music comes from each of us?

There are three playlists: Before and during dinner; after dinner; and other. Dinner and mingling music has a distinctly different flavor from dancing music and I wanted the dinner music to start quiet and light and build up throughout the meal to something more festive in preparation for the energetic party music. Keep in mind, however, that our idea of party music is not just dance music. Neither of us have ever been much into clubbing and dancing, so our taste there could be considered … eclectic. The “other” playlist are songs that I wanted to have available to toss in here and there. Some are fun, some have special meaning.

The Lists, after the jump:

Before and During Dinner:

Other Songs (unique or special purpose):