Open letter to the old men who glare at the loud baby at Mass
72 comments
Share:FacebookTwitter
Faith and Liturgy 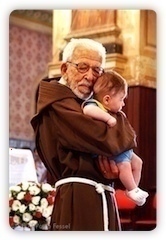 This is what I’d like to say to the primarily elderly folks who complain— within earshot! — about crying children at Mass:

Just who do you think is going to be sitting in these pews in 20 or 30 years when you’re dead and gone? Who will replace you in this parish? Certainly not the children of families you’ve chased off with your disapproving looks and clucking and rude comments. But you’d certainly complain when your parish is eventually closed for lack of vocations, lack of funds, and lack of attendance.

I’ve heard from more than one parent who’s given the excuse for not going to Mass that they are mortified by their children’s behavior and just can’t get them to behave. Some of that is undoubtedly a cop-out or inexperience or lack of trying alternative parenting techniques. But some of the fear is due to the unfriendly huffing and puffing a baby’s squawks or a toddler’s fidgeting receive. It’s difficult enough to drag oneself out of bed, rush some food into the kids, get them dressed, shuffle them into the car, and have them sit quietly and attentive for an hour without the added pressure from you.

And let’s not overlook that it is my experience in every parish I’ve been a member that the loudest people are elderly themselves! In my old parish, at one holy day Mass, an older gentleman actually stood up before Mass and scolded the old women who were gabbing incessantly. They were indignant, of course, since this was their normal behavior at every Mass. At least a child has the excuse that he doesn’t know any better.

Oh and the old men complaining about crying children? They were themselves leaving Mass early! While a parent stood in the entrance to the church, comforting said squawky child, these grumpy old men were hightailing it out the door after Communion. I see that all the time, too. It’s not the families sneaking out before the end of Mass.

I recall an anecdote about a pre-Vatican II priest who would send altar boys with candles out after early departers, reasoning that they were still tabernacles of the Eucharist. Another perhaps apocryphal anecdote is related about a priest who hung a banner over the exit that read, “Judas was the first person to leave Mass early.” I don’t know how effective such efforts would be, but the fact is that it betrays a particular attitude in the one who leaves early. Would the same people go to a friend’s house for dinner, then walk out before dessert without saying Thank You to their host? And where in the world do they have to be on a Sunday morning in such a hurry that they can’t wait 5 minutes? It’s disrespectful to the congregation, to the priest, and above all, to Jesus Christ Himself.

So I say to all the old grumps: Lighten up and rejoice that there are actually signs of life in your parish, that there are parents who believe that it is important to pass along the practice of the Catholic faith, not merely its cultural trappings. And that one day those squawking babies will have families of their own to usher into Mass to pray for your soul after you’ve passed on.

Update: (Putting a comment I made in response to another comment up here to prevent further misapprehensions) To clear up a misconception here: Note that I did not say that the people who glare at my kids should tolerate disrespectful behavior by kids or parents who don’t do their duty.

My kids are very well behaved and we get lots of comments on their good behavior, but that is what makes all the more maddening the few times that the infant is cranky or the toddler bumps her head that we get glares from others.

Toddlers and infants are very young. They can be well-behaved, but they will never be silent and still for long periods of time. They can’t be. Getting angry because my kids are true to their nature as children is unreasonable.