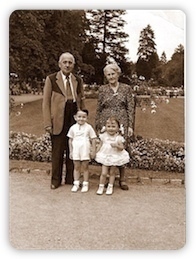 The US Census Bureau has redefined the word “parent”, according to a New York Times story on a spike in the percentage of black children being raised in two-“parent” families.

The point of the story is to tout this gain, which may be entirely due to a re-definition of terms and not any actual change in society. Other possible drivers of the “trend” include more immigrants with traditional family structures who are part of the group known as the “black population” and an emerging black middle class. Yet, without giving us a breakdown, the bureau drops this bomb in the middle of their report, which to my mind invalidates the conclusions.

The Census Bureau attributed an indeterminate amount of the increase to revised definitions adopted in 2007, which identify as parents any man and woman living together, whether or not they are married or the child’s biological parents.

There’s no denying that grandparents, aunts and uncles, foster parents, or just good-hearted folks who raise other people’s children are better for these children than not having anything, the re-definition of the word and concept of “parent” broadens its meaning to insensibility and risks watering it down, not unlike what has been done to the word and concept of “marriage” by civil partnerships, same-sex “marriage” and no-fault divorce.

It is undeniable that children are better off when raised by both parents living together in a loving household. And, yes, it is better for children not to be raised by abusive or neglectful parents. I would agree with author Orson Scott Card on this point:

There are marriages that desperately need to be dissolved for the safety of the children, for instance, and divorced parents who do a very good job of keeping both parents closely involved in the children’s lives.

But you have to be in gross denial not to know that children would almost always rather have grown up with Dad and Mom in their proper places at home. Most kids would rather that, instead of divorcing, their parents would acquire the strength or maturity to stop doing the things that make the other parent want to leave.

So why re-define parenthood? For one thing, it’s the bureaucratic impulse. When faced with a difficult problem not easily solved in one budget year or one administration’s term, you redefine “victory” in order to show that you’re doing a good job. But there’s also another impulse, connected to the marriage issue, which is the effort to re-engineer society, to break down the old structures with their traditional morality and strictures to usher in a new age that conforms to new desires and trends. Plus, it does away with all the inconvenient guilt over “broken” homes. Pretty soon you won’t be allowed to talk about the nuclear or traditional family. Already we’re made to feel guilty for excluding single-parent families and families where the grandparents are raising their grandkids in the absence of the parents.

The family is the most fundamental building block of society, not the state, not even the Church. Everything else is built on that foundation and we’re now tinkering with that foundation. If we’re not careful the whole tower of civilization will come tumbling down on our heads.